Here are my ten literary gods.
Who do you worship at your keyboard? 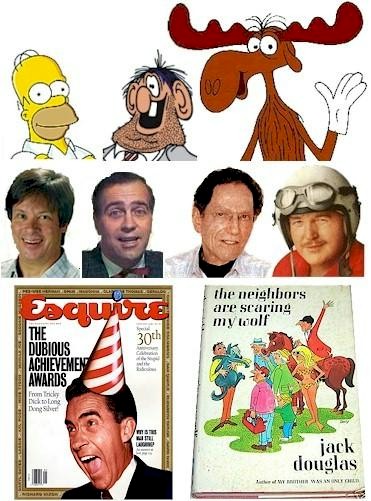 ● Jack Douglas (1908 - 1989) was an Emmy Award-winning comedy writer on The Jack Paar Show, The George Gobel Show, Laugh-In and other TV programs. I remember him most for his book titles, which include My Brother Was an Only Child, Shut Up and Eat Your Snowshoes, The Jewish Japanese Sex & Cookbook, a
nd Never Trust a Naked Bus Driver. See: http://en.wikipedia.org/wiki/Jack_Douglas_(writer)

● Michael Solomon and David Hirshey edited and did the headlines for the annual Esquire magazine “dubious achievements” awards in the 1990s. Why is this man laughing? See: http://observer.com/2008/01/beloved-iesquirei-franchise-dubious-achievements-becomes-one/

● Tom Lehrer claims he "went from adolescence to senility, trying to bypass maturity." That's my life path, too. Maturity is elusive, unnecessary and over-rated. Tom was a Phi Beta Kappa student who taught at MIT, Harvard, and Wellesley, but is best known for hilarious songwriting, much of it political satire in the 1950s and 60s. Lehrer's musical career was notably brief: he said that he had performed a mere 109 shows and written 37 songs over 20 years. Tom developed a significant cult following in the U.S. and abroad. Britain's Princess Margaret was a fan, and so am I. I can still sing lyrics I first heard in seventh grade. Some of his first songs were recorded onto flexible records bound into MAD magazines. See: http://en.wikipedia.org/wiki/Tom_Lehrer

● Jay Ward, creator of Rocky & Bullwinkle, Dudley Do-Right, Mr. Peabody & Sherman and  Crusader Rabbit. The Rocky show was filled with literary allusions and magnificent puns (or horrible puns, depending on your outlook on such things). Unless you are an old fart who watched TV in the fifties and know that Durward Kirby was the sidekick on "The Garry Moore Show," you would not appreciate the pun in "Kerwood Derby," a hat that increased the intelligence of its wearer. See: http://bullwinkle.toonzone.net
Posted by Michael N. Marcus at 5:50 AM