What if Joe Biden won't write a blurb for your book?
Also: beware of blurb-swappers 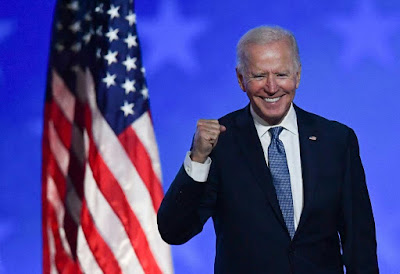 Every author dreams of having cover blurbs (endorsements) from famous people who'll say nice things which may entice other people to buy books. Now that Joe Biden is the likely next president of the USA, he's probably too busy to read your new book and write a review or a burb for it.

Often, especially for a new author with a new book, it's just not possible to get the attention of a celebrity or expert who will add authority to yours.
The first book from my tiny publishing company, Silver Sands 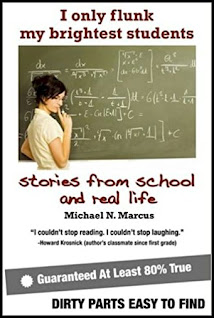 Books, was I Only Flunk My Brightest Students: stories from school and real life (2008). It deals with my life. It made perfect sense to use blurbs from people who know me, rather than some distant Nobel Prize winner or bestselling novelist or historian.

The book is funny.

Identifying Howard Krosnick, the source of my front cover blurb, as "author's classmate since first grade" is almost a parody of the traditional stuffy IDs ("professor of Indo-Eurasion folk medicine at the University of Guatemala), and reinforces the mood of the book. Howie said, "I couldn't stop reading. I couldn't stop laughing." Blurbs don't get much better than that.

The blurber, Nicholas Santiago, is someone I know through business. His words are sufficient. I see no need to explain who he is, and I doubt that Lindsay Lohan, Ivanka Trump, Paris Hilton or Perez Hilton  could have written a better recommendation. I received "five stars" and some nice words from the Midwest Book Review—but those words are not as funny as Nick's words.

Most blurbs I've seen are written by authors, and many of them are not well-known authors. Apparently "Author A" thinks she or he will gain some useful publicity by having a quote printed on the cover of a book written by "Author B." 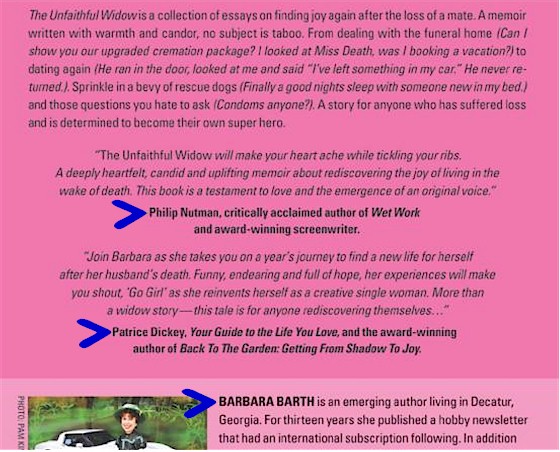 (above) Barbara Barth wrote a wonderful book, The Unfaithful Widow: Fragmented Memoirs Of My First Year Alone. The back cover shows great reviews from authors Philip Nutman and Patrice Dickey. I never heard of them. The reviews on Amazon from 'ordinary' readers may be more persuasive.
A good way to find “amateur” blurbers who might write sincere comments about actually benefiting from your book is to observe online communities that are concerned with your subject. If you find articulate people with problems your book solves, offer to send them free advance copies (even PDFs or word-processing files if bound copies are not yet available or if you will not be publishing on paper) in exchange for their comments. You can say that you’d like to know if the book was helpful and how it can be improved. Mention that you might like to quote their comments, but don’t guarantee it. 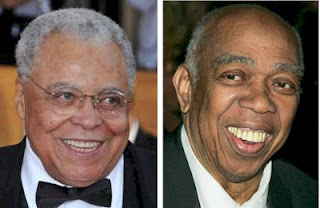 Request blurbs as long in advance as possible—as soon as you have a draft of your book that is good enough to show. The book does not have to be complete. You can probably get by with an introduction, a table of contents, and a few chapters sent as a PDF. If you want a blurb from someone famous, it’s probably better to send an ARC (advance reading [or "review"] copy) than a PDF.