Outskirts is a company that specializes in extracting money from naïve wannabe authors who have no idea how to judge the quality of a book or the company that produces it.

The company was founded in 2002, but even after 18 years, it still uses a UPS store as 'corporate headquarters.' Apparently its employees worked from their homes even long before the COVID-19 disaster. 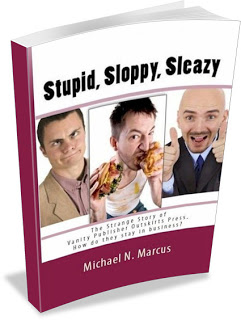 [above] Outskirts is so terrible that I wrote a book about it way back in 2010.
I am amazed that the company is still in business—but each year there is a new crop of hopeful Pulitzer winners who neglect to do even very basic research before selecting a publishing services provider and then paying money to Outskirts.
Outskirts Press has called itself "the fastest-growing full-service publishing provider" and frequently touts dubious awards the company and its books have collected. Some of those books, and the press releases that promote them, are filled with silly errors that should have been avoided.

When authors are disappointed (and enraged), service reps hide behind the fine print of a contract that does not warrant that books will be error-free. Outskirts is also inept (and dishonest) when it promotes itself. Its website, emails, press releases, blogs and promotional literature have factual errors, mistakes in grammar, spelling and arithmetic—and deliberate distortion.

Outskirts uses such grandiose phrases as "a veritable army of publishing professionals" to attract customers—but those professionals tell lies to make independent self-publishing seem much harder than it really is.

Although Outskirts uses such buzzwords as "self-publishing" and "print-on-demand," it's really a vanity publisher. Vanity publishers make most of their money by selling services and overpriced trinkets (even sneakers bearing the images of book covers!) to naïve authors—not by selling books to readers. The books are often ugly, unedited and overpriced. They sell poorly, and are seldom reviewed.

Boss Brent is as incompetent as his staff. I used to pick on him and them regularly in this blog, and it's time to do it again.

On the second page of the foreword to Self Publishing Simplified, Sampson refers to "off-set" printing, with a hyphen between the "off" and the "set." The term also appears on four other pages in the book.

That's a really stupid error, especially for a book publisher. The correct term is "offset," and it's been that way for over 100 years since offset printing was invented by Ira Rubel in Nutley, New Jersey.

On his company's website, Sampson urges writers to use an editor and says, "Errors in your writing cause readers to question your credibility." I question his.

The back-of-book bio says Sampson is an "accomplished artist and writer." His personal website has a stupid typo: "earn up to tens-of-thousands a dollars." Based on this, I'm not impressed with his writing accomplishments.

The book has a 'foreword' written by Sampson—which goes against normal book publishing rules. A foreword is not supposed to be written by the author. Sampson should have called it a preface or an introduction or hired someone else to write the foreword.

According to Sampson, "Peter Mark first published the Thesaurus in 1852," strangely ignoring the much more famous Peter Roget who published his Thesaurus in the same year. Actually Mark was the middle name of Peter Mark Roget, so Sampson was two-thirds right.

He also says getting an ISBN (the unique identification number for each book) is a "headache." Sorry, Brent, that's just not true. I ordered five ISBNs in about five minutes. All I needed was my keyboard and a credit card. I never touched the Tylenol bottle.

Sampson also talks about the troubles that "Most self-published authors" have getting their books distributed, the high percentages paid to Amazon, and the high costs of setting up websites. That's self-serving fiction designed to make his own company look good, and he can't possibly know the experiences of "most..."

The company's book prices are often absurd, and seem likely to doom book sales. Should a hardcover cost more than twice as much as the paperback edition? (Probably not.) Would you pay $51.95 for a book about beekeeping, or $28.95 for a book about circumcisions?

Outskirts issued a press release (prepared by error-addicted Kelly Schuknecht) announcing that six of its authors appeared in an Outskirts ad in the "New York Times Review of Books."

Authors' bios include irrelevant info. Does knowing the name of the dead husband of an author motivate you to buy her book? Probably not. 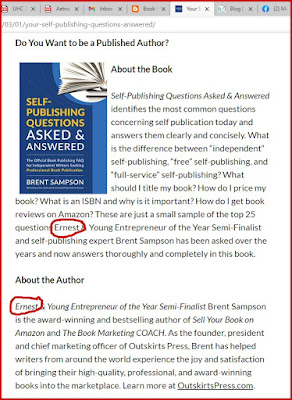 These bits of foolishness and outright deceptions do not inspire confidence. Neither does a silly error appearing TWICE in a recent ad. Brent is identified as an "Ernest & Young Entrepreneur of the Year Semi-Finalist." The correct name is Ernst, and has been since 1903.

I am not perfect, but I strive to avoid errors in my writing. Outskirts Press does not, either in the books it publishes for others or in its own promotional materials. The company's "one-on-one support" and "veritable army of publishing professionals" are highly unprofessional.

Here's a complaint from one Outskirts customer:

BEWARE!  These people are crooks!  I was so excited to publish my first book back in 2013, and they DID NOT Pay my royalties.  I advertised my book myself, despite the fact that I paid Outskirts Press to advertise, which they did not, aside from just placing my book on Amazon and B&N, a service that I also paid extra for on top of the supposed advertising.   When advertising myself, found many people had purchased my book, and one customer actually bought 10 copies to give out as Christmas gifts.  With all that, I received less than $20 in royalties in 7 years, from 2013 thru present, as I saw people purchase my books and even saw them advertised on Ebay.  Plus, in very small print they state in your contract that you are responsible for a storage fee due every year.  Because I opted for a paper back and hard cover, I was expected to pay $50 every year for storage.  I would not have minded that, if I had received my royalties.  When you first contact them about publishing, they are the absolute nicest people around, UNTIL you are old news and then NO One ever responds to phone calls or emails.   After not receiving royalties for years and not getting return emails or calls, I finally stopped paying Storage fees AFTER paying them on time for 4 years while never seeing a penny of my royalties.  So now, through a complaint with the BBB, Outskirts Press responded to my complaint by saying because I didn't pay the storage fees, I was not entitled to receive any royalties.  This is so underhanded!  They trap you first by not paying your royalties or paying just a very small fraction (Less than $20 over 7 years!), do not answer emails or calls, to where you become so frustrated, you just stop paying the storage fees after paying them on time for 4 YEARS, and after not getting your royalties!  AND this is how they get you!  They turn it around and say you didn't pay your storage fees while continuing to sell YOUR book, collect profits and NEVER pay you a dime afterwards!  I should have read the reviews before I involved myself with them.  I SEE NOW SO MANY PEOPLE WERE CHEATED OUT OF THEIR ROYALITES AS WELL.  THIS SEEMS TO BE A VERY COMMON COMPLAINT WITH THIS COMPANY.  PLEASE BEWARE!  Take a look at the BBB (Better Business Bureau) website and you will see for yourself!  They have full control of the accounting so it's easy for them to cheat you.  If I had known they'd be so underhanded, I would have never gone with them