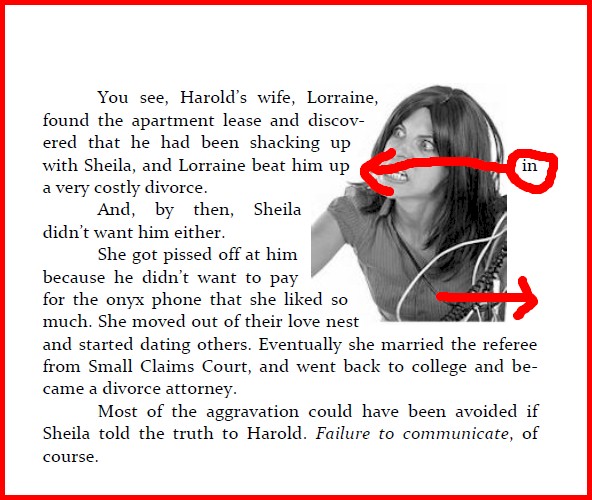 [above] Despite multiple editing sessions, until after I had a printed book in front of me, I did not see that the photo had moved away from the right margin, and a word was misplaced. 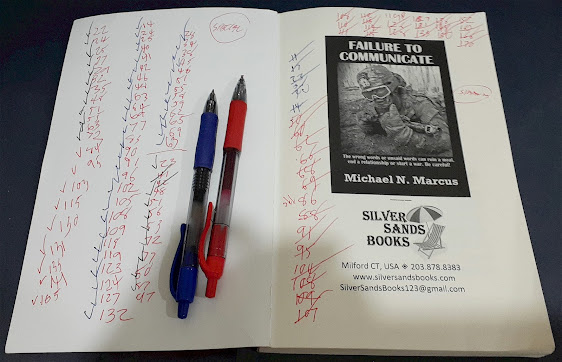 [above] Here's what a not-ready-for-prime-time book looks like after I found things that needed to be fixed. I did not see the errors until I had a printed book.

A few weeks ago I uploaded what I hoped would be the final version of my wonderful new book, Failure To Communicate. The title is from dialog in the highly acclaimed 1967 movie Cool Hand Luke, starring Paul Newman. 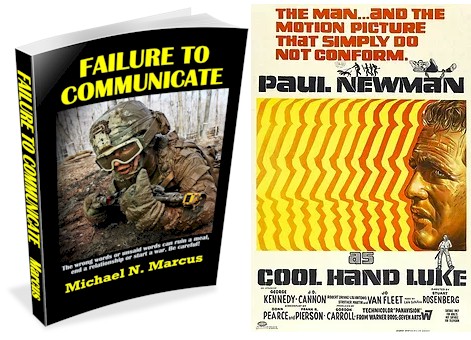 It's been on sale for about a month but I've been tweaking and adding and have held off on promoting the book until the ebook version was available. Yesterday I received a physical copy and I'll study it carefully.

I've already made hundreds of corrections. Most of them were too tiny for mere mortals to notice or be bothered by—but I was compelled to find and fix them. Perfection is elusive and probably impossible, but I am honor-bound to strive.

Sadly, I find tons of errors in books published by major companies with huge budgets for editors. One of the sloppiest I've recently read is the highly enjoyable American Nations: A History of the Eleven Rival Regional Cultures of North America. Every chapter has words that run together. A ten-year-old with no degree in journalism could have found them and fixed them.
A while ago I attended a lecture by a very bright doctor. The "handout" he distributed had over a dozen blatant errors. He is apparently a skilled surgeon, who does better with a scalpel than with a keyboard. Anything you write with the hope of generating business deserves professional editing.
Back to my new book: I'm sure I'll find dozens of stupid errors to repair, and each repair can cause still more errors. 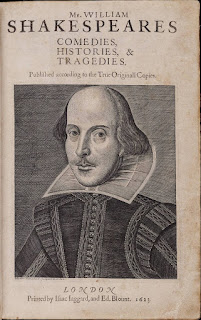 Even though I'm careful and experienced, I am far from perfect. I am often amazed at the errors that should have been obvious that eluded me through dozens of examination sessions. Sometimes I make changes simply because I've changed my mind and don't like something that seemed just fine a few months ago. Sometimes I'll take advantage of the delay to add things.

While you'll spot many errors in a book manuscript when it's displayed on a computer screen, you'll probably detect even more when it's printed on paper—like a real book.

Amazon KDP (formerly CreateSpace) and Lightning Source will provide PDF proofs on your PC screen for free, or printed proofs for about $20, delivered. If you are planning to have Amazon KDP print your books, you may as well let them provide proofs. HOWEVER, if you are willing to approve an imperfect book to be on sale temporarily, you can get books faster and for less money by ordering from Amazon! Your purchases may even help your book's sales ranking.

Years ago, after three brain-numbing read-throughs of a second-generation proof from Lulu, I figured I was ready to upload my PDF files to Lightning Source so I could start selling books.

I realized that it was destined to have as-yet-undiscovered errors, and I had a thought.

If I could get a printout on paper, I could give it one more read-through and make corrections over the weekend, and then upload the PDFs on Monday or Tuesday and still get a pretty proof from Lightning Source by the end of the week.

I was vaguely aware that some of the copy-and-ship franchised stores could print from a thumb drive. I did some checking online and was both surprised and thrilled to learn that UPS Stores (formerly Mailboxes Etc.) could accept files as online uploads, and that there was a UPS store just seven minutes from me.

I quickly established a UPS account online and uploaded the file. This was around noon, and I was informed that my print job would be ready by 4 p.m. The price was just $27.31, including three-hole punching and sales tax and file storage. At a little after 2 p.m. I received an email notifying me that the work was ready for me to pick up. $27.31 was more than the minimum $15.81 that I could have paid Lulu, but I received the "book" in hours—not ten days. It was less expensive—and faster—than the proof from Lightning.

Unlike a Lightning, Lulu or KDP proof, the UPS proof didn't include a coated and colorful bound-on book cover. However, I quickly discovered that the three-hole-punched format is MUCH BETTER for proofing.

When put into a binder, the pages stay flat for reading and marking. And since my pages are formatted for 6 x 9 but UPS used 8.5 x 11-inch paper, there was plenty of extra space for my proofreader's marks and even for copy revisions. I really liked being able to insert tabbed dividers, and quickly started to use the pocket in the front cover to hold my red Sarasa editing pen, Post-Its, bookmarks and a small pad.

I had to go out of town the next day and knew I'd spend some time in my car waiting for my wife to shop. I took the binder with my proof, propped it up on the steering wheel, and got to work. It would have been much more difficult to do this with a normal bound book.

By page 173 I found at least 200 things to fix which I had not noticed on my monitor or in the Lulu proofs.

It's very important to check your books in multiple media: on-screen as a word-processing file, on-screen as a PDF, as a PDF printed on plain paper, and as a bound volume. Each medium will reveal different errors. Even if you plan to publish only ebooks, paper proofs will help you get a bit closer to perfection.

No matter how many time you check your manuscript, there WILL be errors in your final pbook or ebook. 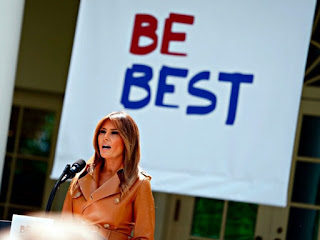 Melania Trump advised kids to "be best." The language is awkward, but it's good advice for authors as well as children. (photo from conservativemedia.com)
Posted by Michael N. Marcus at 7:29 AM