Authors: the lowly Table of Contents is your friend. Don't ignore it. 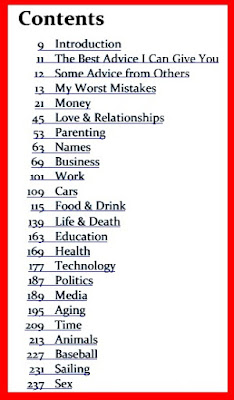 Apparently most authors of nonfiction wait until their books are written before assembling the Table of Contents—or they rely on an editor or designer to produce it.

I think this is a big mistake. The lowly "TOC" is not mere drudge work to be delayed or shunted to others. It's a valuable writing tool that can help you make (and sell) a better book. Instead of ignoring it until your book is written, make it a tool (and friend) to be used from the very beginning.

While the page numbering in your book will constantly change as you write, a TOC can help you keep track of what you've written—and what still needs to be written.

Even though your chapter names will likely change, too, a list of those names can help you spot names that sound silly, make no sense, or are incompatible with others or with your book's title.

While it's fine to have chapters of varying length, an author must try to balance the lengths of the chapters. Even temporary page numbers can help you determine if you are paying too much attention to (i.e.: giving too much space to) a particular topic. Maybe one long chapter should be chopped into several shorter chapters.

Maybe your sequence of chapters should be changed.

Back in 2009, just minutes before I had planned to send a book to the printer, I decided to check my table of contents. I had a feeling that as I changed the lengths of some chapters, a page number might have changed. I actually found three wrong page numbers, and two chapters were missing from the table.

Since the sequence of chapters and the numbers of their starting pages will frequently change as the book evolves, make sure that the final version is accurate.

Another time I was trying to find a chapter in one of my books that has many chapters. I couldn't find it by flipping through the pages, and I couldn't find it by studiously scanning the table of contents. When I looked even more carefully, I realized that the last entry at the bottom of one page of the TOC was Chapter 51, but the first entry on the top of the next page was Chapter 53. There was no listing for Chapter 52.

The table of contents can be an important sales medium, so make it complete, clear, informative and well-written. The TOC is normally forward in the "front matter" and one of the first things seen by potential purchasers who are shopping at either online or terrestrial booksellers.

For nonfiction, if chapter titles don’t explain what the chapters are about, add some explanation. OTOH, a mysterious chapter name might captivate readers.

For a fiction book, you can skip the table of contents, unless the book is a collection of short stories.

Note: most ebook formats are "flowable" and the books have no fixed page numbers, just a sequence of chapters that can be reached by tapping a finger or stylus, or by lots of finger swiping.

You can call the table simply “contents” and leave out “table of.” However, James Felici, author of The Complete Manual of Typography, one of the best-looking and most informative books about the publishing business, has a full-fledged “Table of Contents.” I would never criticize him, and if you put out a book as good as his, I won’t criticize your table of contents either, no matter what you decide to call it.

James came up with a nice innovation that you may want to emulate. Ahead of his complete ten-page table of contents he has a one-page “contents at a glance” to make it easier to find the major sections. If you have a large, complex book, try it. 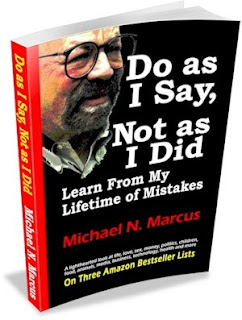 The TOC up at the top is from my useful and funny bestseller, Do As I Say, Not as I Did.  It's available as a paperback and ebook.
Posted by Michael N. Marcus at 5:13 AM 1 comment:

TIME OUT.
For most of the summer of 2019 I'll be authoring,
not blogging 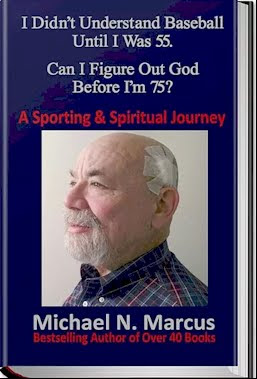 Due in the fall, 2019
​
I Didn’t Understand Baseball Until I Was 55.
Can I Figure Our God before I’m 75?
A Sporting & Spiritual Journey,
by Bestselling Author Michael N. Marcus
​
Author Michael N. Marcus was born in the Bronx in 1946 and spent the first six years of his life just a few miles from Yankee Stadium. Despite this proximity, he never became a baseball fan―probably because he never received a proper explanation of the sport. ​According to Marcus, “When other kids asked me who my favorite player was, I’d quickly say “Mickey Mantle.” It was an easy answer because Mick and I shared initials and nobody would disagree.”
​
In 2001 a nephew and nieces begged Marcus to take them to a game at Yankee Stadium. He packed a radio with a headset, and a book. Marcus set the radio to WCBS, allegedly an all-news station, and he was shocked to encounter a play-by-play analysis of the game in front of him. Soon he began to understand “the national pastime.”
​
In baseball, it had always seemed to Marcus, that it was the hitters who were the heroes. People like Mantle hit the balls that drove up the scores that won games and the World Series. But what he learned from the radio was that it was the pitchers and catchers—not the hitters—who were really in control. Balls―not bats―made the big difference.
​
​Throwing was more important than hitting, and it was the silent, stealthy, sneaky catchers squatting behind home plate who signaled instructions to pitchers who caused hitters to strike out. ​Because of good pitchers, even good hitters seldom got good hits. And, if they did, the balls were usually caught by good fielders. ​Marcus actually enjoyed baseball that day.
​
​​The parallel premise of this book is that Marcus’s concept of God was based on inadequate information plus childhood images of an old guy with a long beard up on a cloud. Marcus says, “​I outgrew religion when I was 12 years old and could not get a good explanation for why the mighty Supreme Being who smote the enemies of the ancient Jewish people did not stop Atilla the Hun, the Great Plague, the Spanish Inquisition, the Holocaust and the KKK. ​ I wondered if the allegedly omniscient, omnipresent, omnipotent King of the Universe was absent, distracted, no longer cared, or never actually existed. ​I could accept the notion of a creative force (which I label The Prime Catalyst) but I could not make a transition from a Big Bang to a Supreme Being that should be feared and prayed to. ​I recognize that I don’t know everything, but the possibility of there being a super-entity is so remote that I am willing to live my life as if it does not exist.”
​
​Marcus’s late understanding of baseball made him appreciate the sport, but it came too late to make him a fan. ​Similarly, he had his first coffee on his 70th birthday. He liked it, but never became a fan. In researching this book Marcus hopes to arrive at an ‘adult’ understanding of God.

Will a better understanding make him a believer, or maybe even a fan? Perhaps. The answer is ahead.

This book is a sporting and spiritual journey. Enjoy the ride.

Posted by Michael N. Marcus at 5:24 AM No comments: