Book promo postcards usually make no sense, except for the companies selling the cards 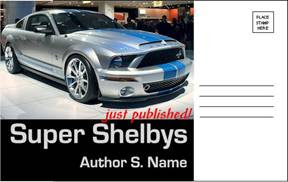 As I've pointed out many times, since self-publishing companies sell few books to readers, the companies must make their money by selling services and paraphernalia to writers.

As shown below from the Outskirts Press website, the promotional postcard is a common piece of paraphernalia that writers can buy.


The frequently inept and dishonest Outskirts says: "Postcards are the most effective direct mail piece" and sells 500 for $329, raised from the previous $249. The new price is the equivalent of 66 cents each. YIKES.

(below) Sleazy AuthorHouse offered an even worse deal, selling twice the quantity (1,000) for $535 (53.5 cents each) but prices are not now on the website. Is the company embarrassed? 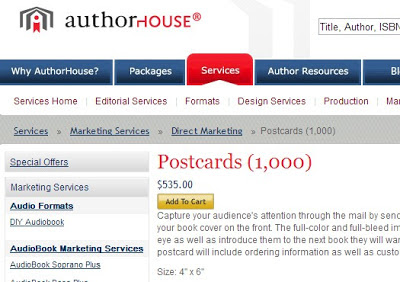 The self-pub websites are generally vague about where the cards should be sent. However, "Christian" self-pubco Xulon press says, "Now you can mail a full-color postcard about your book to family, friends, bookstores, and more!"—but doesn't provide pricing online.

Sending postcards to bookstores is probably a waste of money, as is sending them to your friends, former landladies and distant cousins, or ordering postcards to push a novel or poetry book.

However, if you publish a useful and interesting nonfiction book, and can get a good mailing list, then the campaign might work.
I’ve use VistaPrint for cards (not for cards touting books, however). VistaPrint will sell you very nice color cards for just 20 cents each even in quantities as small as 100. In larger quantities, the price can drop to less than a nickel per card!

Keep in mind that the response rate to direct mail pieces is usually less than 5%, often much less. And, you'll have to pay 35 cents to mail each card—even the 98% that don't sell books.

If you do the math, there's a good chance that you'll find that it makes little or no sense to spend money on a postcard campaign. Would you spend $535 for 1,000 cards plus $350 for postage and $1,300 for a mailing list rental (total $2168) to sell 25 books on which you'll make maybe four bucks each? You can send out more cards if you want to lose more money, or buy the cards direct from the printer to lose a bit less money.

If you are convinced that cards can be useful, they must be part of a multifaceted marketing campaign, and ideally should arrive while other strong publicity is going on.
Posted by Michael N. Marcus at 6:59 AM