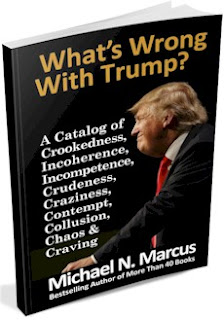 My new book about Donald Trump now has 35,053 words. I'm past the half-way point as my target "pub date" of March First approaches.

I am simultaneously researching, writing and editing.

The toughest part is deciding which chunks are not really necessary, in order to provide a proper balance both within and among chapters.

I have a tendency, inherited from my father, to say too much--and I sometimes must tell myself to STFU. Pop liked to teach, and to win arguments. But he insisted on providing 'evidence' long after he won an argument, and hated it when someone figured out the point of a lesson and tuned out before he delivered the final word. One of my perpetual problems is giving too many examples. It's partly pedantry, which I inherited from my father. It may also be a bit of egomania, to show off how much I know. My natural impulse is to write something like, "British automobile manufacturers--such as Jaguar, Rover, MG, Triumph,

Vauxhall, Austin and Morris--had reputations for unreliable electrical systems."
Under my self-imposed limit, I am allowed ONLY THREE EXAMPLES," so I'd probably ditch Triumph, Vauxhall, Austin and Morris. I'd still make my point, and save some bytes and trees.
When speaking, too many words can lead to annoyance and boredom. In publishing, too many words can increase the price of a book. Every word should be the right word, and there should not be too many words.
How many words are too many? I'm not sure, but books can suffer from either being too short or too long.
Is this post too long? Probably.
Posted by Michael N. Marcus at 1:35 PM