Writers: take the crap test so you'll know if you're good enough to publish a book 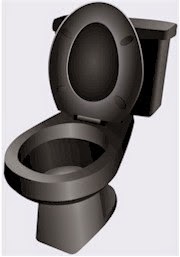 Allegedly "everyone has a book inside them." After seeing so much crap between book covers I can't help feeling that many published books should have stayed with the bones and guts and not be allowed outside the bodies of the writers.
If you are in any of those groups, before you expend any money, time or effort in becoming a self-published author, and if you want to publish for money and not merely for ego gratification or perceived status, I strongly urge you to take the crap test.

If you can’t pass the crap test, it doesn’t mean that you shouldn’t self–publish. But it does mean that it’s extremely unlikely that you’ll make any money at it, and that the money you spend may as well go down the crapper.
Posted by Michael N. Marcus at 11:29 AM