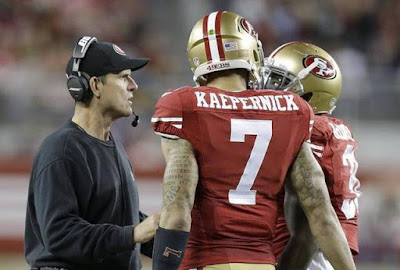 This announcement has nothing to do with outrage over Colin Kaepernick and the National Anthem.

In truth, I have never watched the 49ers play in the past, so I won't sacrifice much by not watching them in the future.

The last football game I watched was between Lehigh University and Lafayette College in the fall of 1964. It was boring, like every football game.

Like most sports, football is a silly substitute for warfare, and the human race is long overdue to evolve beyond it.

Team loyalty is a mystery to me.

Why the hell would someone who never attended college be a fan of Notre Dame or Florida State?

I moved from The Bronx to New Haven when I was in first grade. I was beaten up because I was presumed to be a fan of the Yankees, not the Red Sox. In truth, I had no interest in baseball.

Football is only slightly less boring than watching lettuce wilt.

Hockey and basketball have nearly non-stop action and are not boring. I enjoyed two basketball games and one hockey game in the 60s, but have not felt any compulsion to watch more.

I've watched three live baseball games in my life. The first two, when I was five years old, were boring torture. The third, when I was about 55, was interesting, but too long.

I'm impressed by some of the super-human feats shown in the Olympics, but I don't care which countries win the most medals.

Also, getting gold instead of silver because of a difference of a few hundredths of a second is silly.
Posted by Michael N. Marcus at 8:56 AM