Listen to Aretha Franklin. Readers deserve R-E-S-P-E-C-T from authors and publishers. A $6.99 book should be edited, dammit! 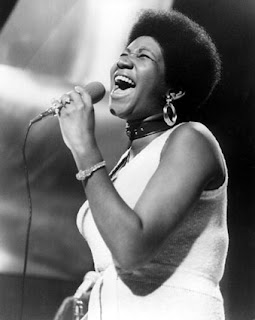 Aretha Franklin's 1967 hit recording of Otis Redding's Respect won two Grammy awards. It's in the Grammy Hall of Fame, the Library of Congress's National Recording Registry, Rolling Stone's list of The 500 Greatest Songs of All Time, and the Recording Industry of America's Songs of the Century.

Although Aretha's version of Otis's work became a feminist theme song and her words tell about a woman's demands from a man, some lyrics perfectly demonstrate the relationship between reader and author and publisher:


The reader is entitled to a properly produced book. That's literary respect. 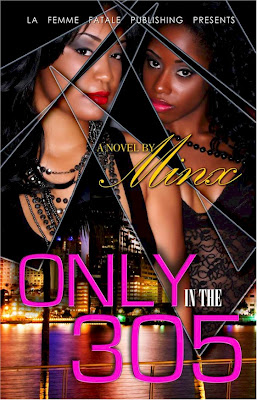 The cover shown is from a disrespectful book.

The publisher is named in a strange bit of Hollywood-style text at the top of the book: "La' Femme Fatale' Publishing Presents." Maybe the two unnecessary apostrophes are intended to imply exoticism to ignorant readers.

The author ("Minx") says this on her Facebook page: "Minx is Miami. I’m the glamour of South Beach and the struggle of the hood. That’s why I’m representing so hard for Miami. The 305 made me who I am." (305 is the telephone area code in Miami.)

Here's how Minx promotes the book: "Money can’t buy you happiness, and beauty damn sure can’t either. Only In Da 305, introduces Eileen and Chayil. Two of the baddest bitches in Dade County. Different circumstances leave them in fucked up situations. Chayil and Eileen have two things in common. Their both dead gorgeous and they love their thugs. They’ll do anything for the thugs in their life. Cook, clean, fuck, suck and of course even carry their drugs. All in the name of love. The only thing is, the only thing their thugs got love for is the game.

Kirk and Dwayne reinvent the word vicious. After all their ride or die chicks do for them they repay them with abuse, prostitution, and disrespect in the most profound ways. They show Eileen and Chayil the only thing a thug can truly love is his money and the almighty pursuit of it. But like a dog every thug has his day. Who will have the last laugh or shall I say, bullet. In this it’s a thin line between love and hate urban tale."

I've heard that some black teenagers dismiss good grammar as "acting white."
Below is the horrid first page. You can left-click to enlarge the image -- but don't show it to children. 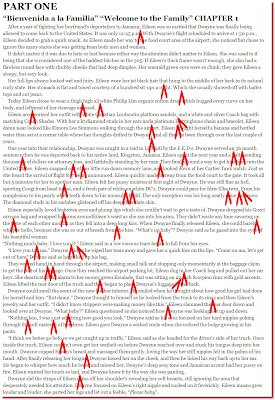 The abundant red arrowheads show just how pathetically unprofessional this book is. It would receive a grade of "F" in junior high school, and its $6.99 price is literary fraud.

I've seen books selling for 99 cents -- and even books being offered for free -- that are much better prepared for publication than this is.

Ironically, Minx mentions that two men in the book "disrespect in the most profound ways." Minx may not be profound, but she and her publisher are certainly disrespectful. Sadly, Minx is a good storyteller. It's a shame that her publisher didn't care enough to hire an editor, and that Minx didn't care enough to insist on editing. If the author and publisher show so little respect for readers, readers should spend their money elsewhere.

In case you think that I'm being too picky, readers noted the deficiencies, too:
-----
Aretha photo from http://www.blacktoptens.com. Thanks.
Posted by Michael N. Marcus at 6:13 AM