Don't order your pizza with tombolo and onions 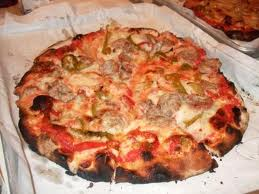 Words can be fun, and even funny.

I've previously written about flongs, dingbats, pilcrows and other strange publishing terms. Today, I'd like to introduce you to the TOMBOLO.

Although the word came to English from Italian, it's definitely not something you'd enjoy on top of your pizza or inside a calzone.

A tombolo is like a sandbar, but it is perpendicular to the shore, not parallel to it. 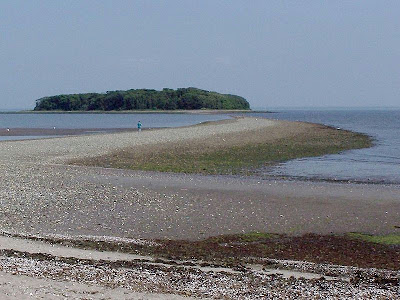 Here in Milford CT, we have a famous tombolo (but everyone calls it a sandbar).

At low tide, it connects Silver Sands Beach with Charles Island -- which may contain buried pirate treasure. I named my publishing company after the beach (which is also a state park).

(1) The first curse was brought in the 17th century by an Indian chief, whose tribe fought for the island which they felt was sacred ground. After settlers defeated the Indians, the chief said, "Any shelter will crumble to the Earth." No building on the island has lasted more than a few years.

(2) The second curse was supposedly brought by Captain Kidd in 1699 when he buried his treasure there. Captain Kidd cursed with death anyone who attempted to dig it up.

(3) The third curse was supposedly brought in 1721 by five sailors who stole Mexican emperor Guatmozin's treasure. Guatmozin put a curse on the stolen treasure. After four of the five sailors suffered tragic deaths, the last sailor hid the treasure in the basement of a Milford tavern. When it was discovered by a drunk searching for beer, the fifth sailor transported it to Charles Island, moving the third curse with it.

Legend says treasure hunters discovered an iron chest in 1850. As they attempted to open it, a "screeching, flaming skeleton descended from the sky. It lurched into the pit where the chest was, sending forth a shower of blue flames." The treasure hunters dropped their tools and fled from Charles Island. They returned the next day and their tools were gone and the digging site had been smoothed over, as if they'd never been there.

Tombolo photo by Randal Ferret
Posted by Michael N. Marcus at 9:52 AM