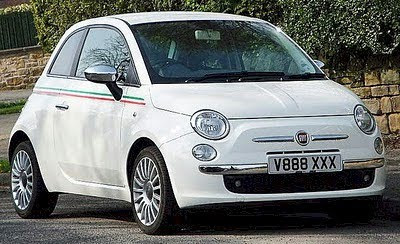 They show a bit of creativity in a tiny space--like haiku and Tweeting. They can be memorable and effective book titles and names for people and products. Even without an effort to be cute, a real name can be alliterative, like publisher Doubleday, General William Westmoreland, sing-alonger Mitch Miller and me--Michael Marcus. My brother Marshall and sister Meryl are alliterative, too. So are Mommy Marcus and my father--Mister Marcus. Mom's father was Dr. Jay Jacobs. One of my author buddies is Barbara Barth. Belle Barth was a very funny and dirty comedienne. Barack oBama has vestigial alliteration.

The Spanish are responsible for con carne.

From France, we get cherchez la femme, Brigitte Bardot, and the Franco-American Michelin Man.

Sweden was the source of the Saab Sonnett.

Germany was the location of Checkpoint Charlie (but it was named by English-speakers), and made the Volkswagen Vanagon.

But Italian--the most musical of languages--is il campione del mondo (the champion of the world) in alliteration.

Mille Miglia (pronounced mee-luh meel-yuh) means "Thousand Miles," an open-road endurance race which took place in Italy from 1927 to 1957, with time out for World War Two.

Cinecitta (pronounced cheena-cheeta) means "Cinema City," a huge movie studio in Rome founded by Mussolini in 1937 and used by Federico Fellini for La Dolce Vita and Satyricon. The studio was also used for "American" films including Gangs of New York.