I forgot my Unhappy Fifth Anniversary on 6/29.
Thanks to the Internet, you could be very unhappy, too.
People can can use your words against you, try to have your books banned, and try to have you killed. 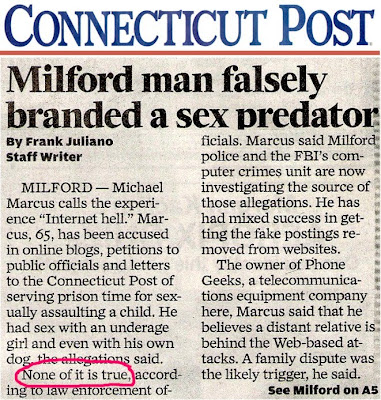 Early on the last Saturday morning of June in 2010, I received an alarming call from an old friend. She said that she had received an email saying that I was a convicted child rapist, published child pornography, burned my wife, had been in prison for four years, drove drunk, used the Internet to find children to have sex with, was part of an international pedophile ring, was a threat to my neighbors, and had even RAPED MY DOG.

As shocking as these false accusations were, things rapidly got worse.

The anonymous accuser sent similar emails to my friends, relatives and business associates and members of the media, wrote accusatory letters to newspapers, set up online petitions to have me put on a list of sex offenders, and established a libelous blog with a huge number of false accusations. He even published pictures of me and my house -- and directions to get here.

The attacker created multiple false identities to join in the attack, formed a phony organization to add credibility, and tried to halt printing and sale of books I wrote.

People called for my imprisonment, castration and execution.

From the very beginning, there was only one obvious suspect, but police and the FBI could not prove who the perpetrator was. I was able to get some lies removed from the web, but some are still there -- and may remain there for as long as the Internet exists.

"Don't be evil" is the unofficial corporate motto of Google, but the Google bosses don't seem to care if their products and services are used by others to be evil.

Google owns Blogger. Blogger hosts the blog that has been the main attack venue against me. That blog contains untrue, vicious, hurtful and absurd accusations (e.g., I was imprisoned in California for four years, I am on a government list of sex offenders, I am a danger to local children, I burned my wife and I raped two human beings and a dog). You can laugh at the last one.

This would seem to be pretty obvious defamation, a violation of Google's terms of service, as defined by Google, and a sufficient reason to have the blog shut down:

Google says: "What is Defamation? •False and untrue communication published with the specific intent of injuring another person’s reputation •Injured person must be identifiable"

HOWEVER, as absurd and obviously defamatory as the blogger's claims are, Google lacks the confidence to make an official judgment of defamation and to protect my family from our online attacker and from those he or she may incite.

The company says, "We do not remove allegedly defamatory content . . . . The only exception to this rule is if the material has been found to be defamatory by a court, as evidenced by a court order."

I tried to convince Google that the material is so obviously defamatory that they don't need a judge's declaration, but they are committed only to protect their corporate ass against a possible suit by their blogger, not to protect people injured by their blogger.

I don't want to have to go to court to get a judgment. It could be extremely expensive, and could take a long time to get the judgment. Google has the money to keep appealing judgments against it.

Under the protective umbrella of the First Amendment, companies that host websites allow anyone to say anything about anyone, and some people will believe the most absurd accusations without any effort to verify them.

I've written an ebook about my ordeal. It includes a fictionalized back story about the likely attacker, the truthful story of the attacks (with color screen shots), the aftermath, recommendations for those who are similarly attacked, and an appropriate joke.

Here's a link to a newspaper article about the attack: http://www.ctpost.com/default/article/Anonymous-Internet-campaign-brands-man-sex-628154.php

My blog about the ordeal: http://not-a-pedophile.blogspot.com

The Internet is wonderful -- except for when it kicks you in the ass. 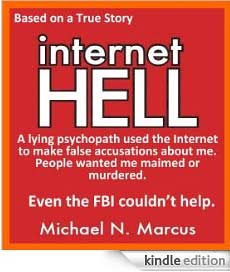