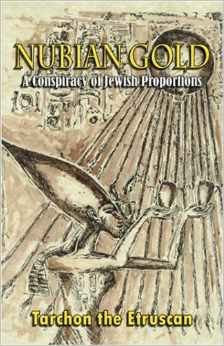 Here's the headline from a crappy-as-usual Outskirts Press book announcement: "Outskirts Press Announces Nubian Gold, the Latest Highly-Anticipated History – Other Book from Houston, TX, Author Tarchon the Etruscan."
If you're more curious or motivated than I was, here's a link for the book on Amazon.com

OOPS. I'm not through.

If you need another reason to ignore the book, read this egomaniacal bullshit about the author: "Tarchon the Etruscan is a student of the human condition, wielding the written craft to enrapture the mind much like an artist wields a brush. The pages are a blank canvas on which to draw from a talent heralded by many and matched only by an imagination that rises to the task. Nubian Gold is the reminiscences of a seer’s vision."

It's hard to read that without puking.

Sorry, Tarchon. Somehow, I just don't feel much of an urge to have my mind enraptured, especially by an  egomaniac who is afraid to use his or her real name.
Posted by Michael N. Marcus at 7:38 AM