Should you trust the New York Times or the Associated Press? Or neither?

The Associated Press is a non-profit cooperative news-gathering organization founded in 1846. That's when five New York City newspapers financed a pony-express route to bring news of the Mexican War north more quickly than the Post Office could.

The New York Times became a member in 1851. It has not decided to quit the AP in more than a century and a half.


The Times both uses news supplied by AP reporters, and makes news available to other media via the AP.

The Times and the AP compete in the publication of writing "style" books. I own, use, like and recommend both books. 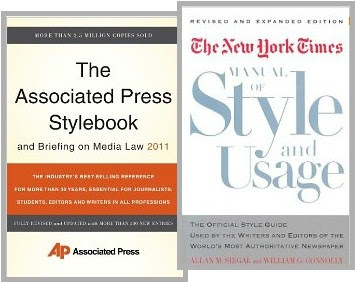 A while ago, working from the same information, The New York Times ("the newspaper of record") and the Associated Press ("the largest and oldest news organization in the world")  came up with very different headlines (up at the top).

You can believe the one you prefer -- or neither of them.

(Yes, I know that a college and a university are not the same thing, but apparently the headline writers didn't care about the difference.)

This reminds me of the time when I was an editor at Rolling Stone magazine in Manhattan in the early 1970s. I walked up Madison Avenue to get to my office at 78 East 56th Street. There was a point where I could see giant clocks on both the Newsweek Building and the IBM Building. The clocks were often more than two minutes apart. I can't remember them ever agreeing.