If an old book can't be cured, let it die 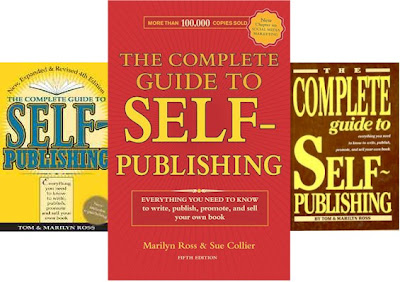 The Complete Guide to Self Publishing has been promoted as "The Bible of Self-Publishing," and criticizing it is almost like criticizing the Bible. In fact, the book is almost as old as the Old Testament. I'm exaggerating. The first version, written by Tom and Marilyn Ross, was apparently published in 1978, when self-publishing was very different from today.

I bought the out-of-date 4th edition in 2008, and the new 5th edition in 2010. It's also out-of-date, and was out of date when it was printed. It was adapted and updated by Marilyn Ross and Sue Collier from the earlier versions

It's advertised as "Completely revised and updated," but it needs more updating.

Many thousands of copies of various editions of this book have been sold, and it has received many good reviews and blurbs. Like the Bible, there are problems with this book. People get into trouble if they rely on books with good reputations that provide bad information.
The glossary needs work.

The book definitely shows its age. It sometimes seems to regard the Internet as a novelty.
The book needs a front-to-back revision and elimination of the ancient artifacts. It’s silly to show a letter (seeking permission to use copyrighted material) that refers to a book coming out in 1985, and apparently composed with an ancient typewriter. Another letter includes “news” of upcoming events in early 2001.

The front cover looks absolutely ancient -- but not funky-ancient, just dull-ancient. There is poor contrast between the type and background, and when the cover is shown as a thumbnail on Amazon.com, only the word “SELF” can be read.

I am extremely disappointed with the interior design. The book is just plain hard to read.

The text type is small. The ink color looks more like gray than black, so there is not nearly enough contrast against the cream-colored pages. White would have been better.

The italic captions are even smaller than the text, and words within illustrations are nearly illegible. The fly-turd-size italics in the index are almost useless.

Chapter names are in tiny italic type in the page footers, and my baby-boomer eyes had trouble reading them with my new glasses. (For the record, I have no trouble with newspapers, magazines or most books, and my PC monitor is set for “normal” size type.)

I recognize that there's a lot of material in this 556-page 6 x 9 book. If it had 7 x 10-inch pages, the type could have been larger and the thinner book would be easier to keep flat for reading and annotating.
There is a tremendous amount of valuable information in this book, but it simply is not ready for 2010, or 2014. It is past-due for a complete remaking -- or maybe it should just be allowed to die gracefully. Anyone who wants to self-publish in 2014 or later will be in trouble if this book is the only resource consulted.

It could continue as an artifact showing the way things used to be, like The Compleat Angler. That book was first published in 1653, but you can buy a freshly printed copy on Amazon.