#1, What they don’t teach at medical school

In the 1980s I had a severe pain in a foot. I no longer remember which foot it was or what caused the pain, but it hurt so bad that I went to the E. R. at Lawrence Hospital in Bronxville, NY.

I was interviewed, tested, X-rayed and given a bill to sign. I was also given one crutch which was adjusted to the right length for my height and a prescription for a few weeks of painkillers.


The crutch is a simple device. It comes without a user’s manual, and it wasn’t hard to figure out how to use it. I raised my bad foot off the ground, let the tip of the crutch serve as a substitute foot, and headed for the exit.


The orthopedic surgeon who had examined me yelled at me to STOP and come back. He explained to me that the crutch is “supposed to be used on the good side, not the bad side.” That didn’t make much sense, but I’m not a doctor.


Then the orthopedic nurse who had assisted the orthopedic surgeon, yelled at him. She said that the crutch is “supposed to be used on the bad side, not the good side.” That did make sense, but I’m not a doctor.


The two medical experts then started a lengthy and spirited debate, each citing appropriate arguments for their divergent opinions. I stood around for a while, and then I plopped into a chair. The audience grew, with supporters for each side cheering and kibitzing.


After ten minutes it became apparent that neither one was going to surrender, and that no higher authority was likely to intervene. My wife was waiting in the parking lot and I had to get to her so I came up with a solution.

I grabbed a second crutch off a rack, grasped it with my other hand, raised my bad foot off the ground, and hopped out of there without looking back. #2,What they should teach at medical school

In 1999, to help a busy storekeeper I knew, I went behind the front counter to answer his ringing phone.


I looked ahead toward the phone and didn’t notice a step. I fell forward. Reflexively, I put both hands out to break my fall.


My left hand impacted the sharp edge of a metal electrical box. A long flap of skin peeled away from my left thumb and I was quickly bleeding like the proverbial stuck pig. An ambulance rushed me to the hospital and a hand surgeon was summoned from the golf course and the ugly gash was stitched up.


I still have a faded U-shaped scar and limited motion in that thumb. The precisely calculated permanent disability paid me not nearly enough money to retire to Monaco. I was instructed to see my own doctor in a week to have the dressing changed.


When I did, I mentioned that my right hand—not the one with the cut—was swollen and hurt a lot, and I was X-rayed. The film revealed that I broke the fifth metacarpal bone, a bone in the midsection of the hand that connects to the pinky. A week earlier, when I was in the emergency room, I had complained about pain in both hands and the E. R. staff knew I had landed on both hands, and my right hand was obviously red and swollen. But all they cared about was the hand that was gushing blood all over their nice clean floor.


I think it would have been logical to examine both of my hands—but I never went to medical school.


The pinky is a small and not particularly useful finger, but an orthopedic technician constructed a monstrous cast to contain, protect and immobilize it.


My pinky and fourth finger of my right hand were wrapped in gauze and encased in plaster and frozen in a curl, pointed at my palm. The cast covered all of my hand except for three fingers and extended up my arm. 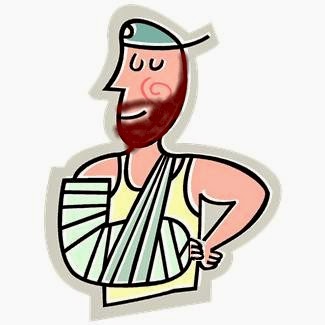 You might think that still having three functioning fingers meant that life was OK. But, life actually sucked.


I’m right-handed and the cast weighed so much and restricted me so much that I could hardly use the hand. I couldn’t even dress myself. It took so long to unzip my fly that I often peed in my pants.


I’ve saved a Post-it note I wrote on at that time. It’s very hard to read.


Using a computer keyboard and mouse was extremely difficult. I ultimately hung a wire from the ceiling over my desk with a loop that could support my arm while I tried to type. My typing was a little bit neater than my handwriting.


When I got the cast, I was told to come back in eight weeks to have it removed.


It was a miserable eight weeks. I gained new sympathy for amputees. I couldn’t drive, and I had to learn how to urinate lefty if I had the need to pee while out of the house.


At home, it was easier to just “drop trou” and then pee hands-free in the shower. (I hope my wife isn’t reading this.) Wiping my ass was difficult, uncomfortable and unsanitary.


I’ll spare you the gruesome details and just say the cast got dirty.


Eating was sloppy, too, and sleeping was never restful. I went in the swimming pool with plastic bags over both arms, as instructed. I perspired inside the bags so the cast and bandages got wet anyway. I had created my own, personal, enclosed weather system and there was a danger of softening the plaster so I gave up on water sports for awhile.


When I had a mid-arm itch, I shoved a chopstick into the cast to scratch it.


Lovemaking was possible but dangerous, and required caution. Casts are great for S&M fans.


When the eagerly anticipated date finally arrived, I went back to the orthopedic surgeon’s office, expecting but not receiving quick relief.


A nurse X-rayed me and looked at my cast and told me I was doing fine and should come back in a month. I protested, saying that I had been told that the cast would be removed after two months and my time was up.


She smiled and said, “I know. We lied to you. We always lie about the time casts stay on. If we told patients the truth, they’d get depressed and cut the casts off.”

(from Stories I'd Tell My Children (but maybe not until they're adults). Available in hardcover, paperback and multiple ebook formats. 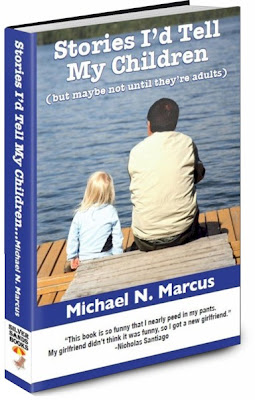 (cartoon from ClipArtHeaven.com. Crutches and cast from Microsoft. Thanks)