"Publish On Demand" does not exist, dammit.

(Above: advertising something that doesn't exist. Would you like to buy a unicorn?

Llumina Press, Booksurge, Lulu, Tate, Outskirts, CreateSpace and others have paid Google to run online ads for the stupid phrase aimed at ignorant writers who don’t know the difference between printing and publishing. There have even been stupidly named websites called PublishOnDemand.net (now apparently defunct) and PublishOnDemandGlobal.com.
Publishing and printing are not the same thing. Printing is part of publishing. Printing can be done on demand. Publishing can’t.

Publishing is a complex, multi-stage process that takes a writer’s words from manuscript to books on sale. The end result of a publishing project, which may be 10,000 books or just one book, can take weeks, months or even years. 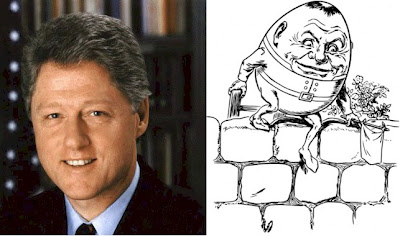 I sure wish publishers would be more careful with the language they and we depend on.

(Clinton photo from the White House. Humpty drawing from http://all-free-download.com. Thanks.)
Posted by Michael N. Marcus at 4:24 AM