A low-key promo for an inexpensive Christmas gift for yourself: 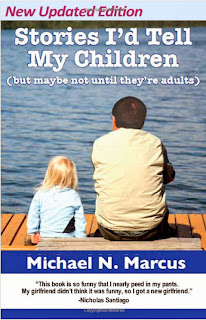 Some people have paid $15, $20 or more for the paperback and hardcover versions of my hysterically funny, bestselling, "Stories" book. Amazon is willing to sell you the ebook version for a ridiculously low $2.51. It's a Kindle ebook, but you can read it on a Nook, PC, tablet, smart phone or almost anything.


The Bethlehem that I passed through, in west-central Connecticut, was serene and unsullied at Christmas.
The Bethlehem that I lived in, in east-central Pennsylvania, had loud noises and dirty snow.
Despite declining business and eventually a complete shutdown, Bethlehem Steel Corporation dominates the city.
In the mid-1960s, I spent my sophomore college year living with a local family. “Poppy George” Webster started working at “The Steel” at age 15 and he was close to retirement when I moved into his home. It was a suburban split-level, several miles northeast of the steel mill’s noise, flames and filth.
I rented the master bedroom with a private bathroom. Mrs. Webster (“Annie-Love”) slept in one of the children's bedrooms, and George slept downstairs in the family room.
He said that this was because he was Catholic and she was Episcopalian. They did have a child, so I assume they were once in the same bedroom for a few minutes.
The son, Wayne Webster, was 21 years old and could have been mistaken for Jethro Bodine on TV’s Beverly Hillbillies — but Jethro was smarter.
A neighbor told me that the family had paid bills for a few of Wayne’s teachers to get him promoted; but he was ultimately forced to leave junior high school on his 18th birthday.
Wayne volunteered for military service during the war in Viet Nam and was trained to drive a truck, but he confused oil and gasoline and couldn't shoot straight. Despite the Army’s need for large quantities of warm bodies, Wayne was not permitted to re-enlist.
Wayne was working in a fabric store when I moved in with the family, but was soon fired because he confused inches and yards and couldn't cut straight. He spent a few weeks in a junk yard, and then found his true calling as a cab driver.
He awoke each morning a little after four, had breakfast, and was behind the wheel of a taxi from six to six. He then came home, had supper, watched TV, and nodded-off before nine. The schedule never varied except for one weekend each month when he had Sunday free. That meant that he could stay up late the night before, and he often went to the burlesque (pronounced with three syllables) in neighboring Allentown to “look at the naked ladies.”
Wayne loved his job and frequently urged me to leave college and drive a cab because of all the ladies I'd get to meet.
Wayne never had a date or went to a disco or dance while I lived with the family, but he kept porn magazines under his bed. And whenever the Websters’ dog Flower was in heat, she seemed particularly attentive to Wayne. Flower would often raise her tail and wiggle her bottom in his direction, and she spent an awful lot of time in his bedroom.
Mr. and Mrs. Webster were troubled by Wayne and they fretted about his future. Most childhood problems had been solved with cash and kisses; but adolescence, adulthood and aging were not so simple.
The Websters had long planned to retire to Florida when George stopped working at 65. Unfortunately, Wayne assumed he would retire with them, at age 24, and they were afraid to tell him otherwise.
They were also afraid to die.
Mrs. Webster said she could never rest in peace knowing she had left Wayne behind “with no one to make him a home.” Sometimes she and George darkly joked about suicide pacts and hired killers.
Annie had given birth to Wayne when she was 40, and was physically worn and emotionally drained from dealing with his problems for two decades; but was a loving mother who remained compassionate and tried to appear cheerful and optimistic.
She'd kiss Wayne goodbye and look him over carefully before he left for work each morning, and made a point of complimenting Wayne whenever there was the remotest reason — even the disappearance of a pimple. She tried to help him make the most of his cabby career, advising him on grooming (“shine your shoes and zip your fly”), manners (“don't tell riders how much to tip you”) and corporate politics (“be nice to the dispatcher even if he's not nice to you.”)
Mr. Webster had no patience for Wayne; he avoided physical contact and hated it when Wayne called him “dad” or “poppy” in public. He felt his son was a disgrace to the family, and regarded him with a combination of disgust and amusement, apparently much like the sixteenth-century Londoners who paid money to watch the lunatics in the Asylum of Our Lady of Bethlehem (source of the word "bedlam.")

For more, please buy the book at Amazon.