My challenge to Top Consumer Reviews: prove you're not full of shit


Reviews of products and services are useful, powerful and time-honored adjuncts to commerce.
Sadly, the Internet requires no qualifications or testing for reviewers.
That seems to be the case with reviews of self-publishing services provided by Top Consumer Reviews.

The website brags that: "We take pride in the service we provide for you, and treat our responsibilities very seriously . . . .  Our expert reviewers . . . .  bring a wealth of knowledge and expertise covering a broad range of skills. Some of their backgrounds include successful careers in: Banking, Education, Entertainment, Entrepreneurship, Finance, Health care, Homemaking, Insurance, Investment portfolios, Management, Military, Sales, Software development, Transportation"

Notably absent from the list are experts with experience in publishing or writing.

More: "Although the makeup of our company is diverse, we all share one common goal: to bring you the best information on the top products available, in a format that's as easy to use as possible. After visiting our website, we hope you feel that we've met that challenge!"

More: Every item we review is meticulously researched so that we can provide the best information for you. We don't stop there. We also investigate the companies that offer these products as well . . . . we strive to deliver current, factual, correct information,

More: "Ratings are subjective and are the sole opinion of TopConsumerReviews.com."

It would be better if the reviewers got opinions from people with more knowledge of self-publishing, especially customers of the self-publishing companies.
Furthermore, the site carries an ad for Outskirts that creates revenue for Top Consumer Reviews when people click on it, and other links to Outskirts that apparently generate "affiliate marketing" income. 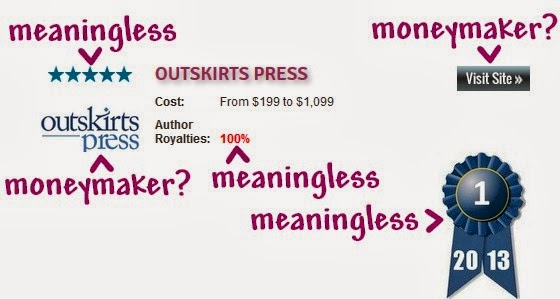 The site tells prospective authors that "Outskirts Press allows authors to keep 100% of the royalties from the sale of their books. This incredible feature sets this program above the rest of the self-publishing services." Saying that Outskirts pays 100% author royalties, with no explanation, is misleading, meaningless and can hurt both competitors and authors. I asked Top Consumer Reviews for an explanation but received no response.

100% of what? Royalty calculation in the self-publishing business is notoriously fuzzy. It's like Hollywood contracts that promise to pay a percentage of the "net profit," but the studios inflate the costs of making the movie so there is no profit left to distribute.

The Outskirts Press website says, "You receive 100% of your author royalties." The site does not show how the percentage is calculated or what is deducted before you get 100%

Author John H. Hohn complained online that "Outskirts Press priced my book at too high for the market and paid me less than $.37 royalty on each."

The Outskirts Press web page shown below brags of "High Royalties" but the examples shown range from about 26% to about 14% -- FAR less than 100%.

The review of Outskirts on TopConsumerReviews.com reads like an ad, not an article (e.g., "With superior services, upfront pricing, and honest business practices, they are dedicated to ensuring the success of their authors.") The opinions offered by the reviewer contradict opinions posted online by unhappy Outskirts customers:
Despite many tales of woe, TopConsumerReviews.com tells us that "Outskirts Press is an excellent self-publishing service. . . . Outskirts Press sets the standard by which all self publishing companies should be judged and clearly earns our highest rating."

So, is TopConsumerReviews.com inept, irresponsible or dishonest?

The company offers this cop-out: "We do not guarantee . . .  that the . . . information provided for each product [is] current and/or correct."

In other words, do not trust anything that TopConsumerReviews.com says. That's excellent advice.