A small cap letter is an uppercase (i.e., "cap" or "capital") letter that's about the same height as nearby lowercase letters. I first noticed them in Business Week about ten years ago, and found them disconcerting.


The theory behind small caps when not used for decoration is that they blend in well with surrounding text instead of SHOUTING AT THE READER like full-size caps. The use of small caps is supposed to be a sign of sophisticated typography, like hanging punctuation (which I may deal with in the future).

There are several problems with a few letters in small caps.
As with many aspects of writing, publishing and typography, sometimes you just have to go with what seems right, rather than apply rigid rules. If you follow any rule 100% of the time, your work will seem stupid 10% of the time. Unfortunately, when you bend or break rules to make what you think is a better book, some people may think you made an error. That's life.

I avoided small caps in my first nine self-pubbed books, but as I tried to get "more professional" I started to use them in book #10, Get the Most out of a Self-Publishing Company: Make a better deal. Make a better book. After several hours, I got so frustrated trying to resolve inconsistencies, I gave up and went back to full-size caps.

If you have a lot of time to kill and are a graphic masochist, you can try using small caps. I doubt that I'll try them again, except in titles or other small doses.

Some typeface packages include characters specifically designed to be use as small caps. Software (including Microsoft Word) can make 'fake' small caps. The real small caps look better adjacent to full-size caps because they have thick strokes to match their big brothers. The fakes are "scaled down" caps and have unnaturally thin strokes. Fakes may be noticed by professional typographers, but probably not by readers. 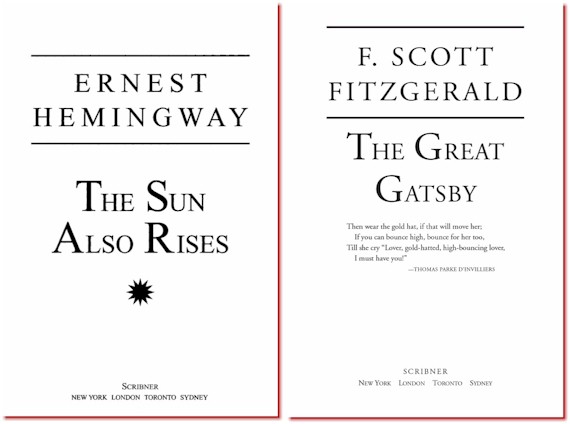 (above) These two similar title pages from Scribner use all caps for the authors' names and some small caps in the titles. I think the titles look nice. (However, I would have slightly tucked the "H" under the "T" in "The" on both pages. That's called kerning.) Strangely, the typography for the name and locations of the publisher are composed differently on the two pages. 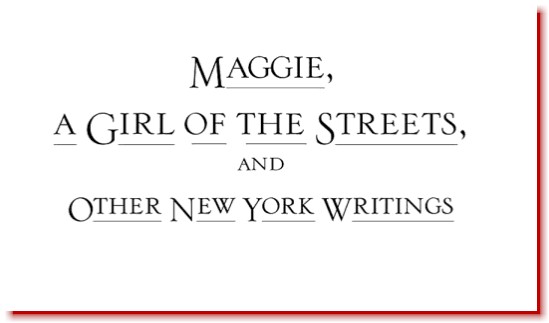 (above) This piece of a cover page from Stephen Crane's book mixes drop caps and underlined small caps. I think it looks like shit.

(above) It's common to start text in a magazine article or book chapter with some small caps. I don't think they add anything useful or attractive here. This looks silly to me. It's an ancient affectation -- maybe a typographer showing off. Why bother? 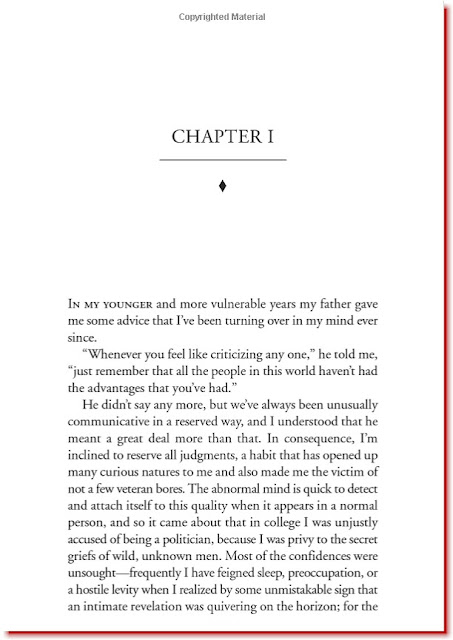 (above) This is the opening of The Great Gatsby. I think it looks silly to start with a big "I," then switch to small caps, and then use normal type. 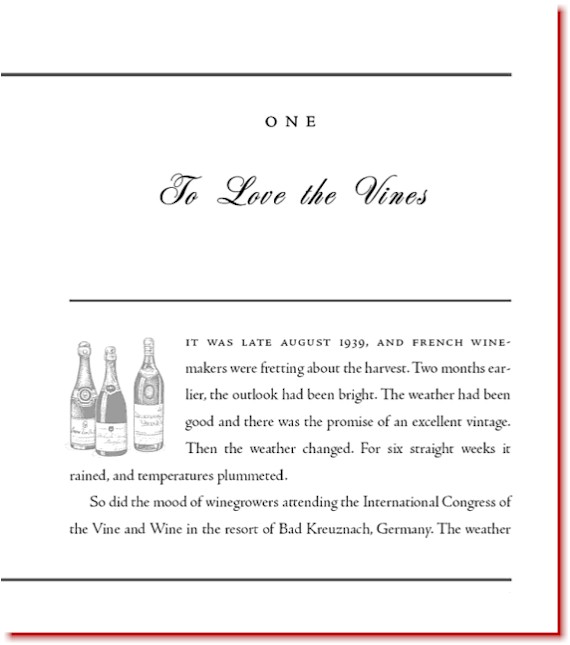 (above) This chapter-opener has a full line of small caps following a dropped-in illustration. The word "winemakers" is half small caps and half normal. I think that's silly. 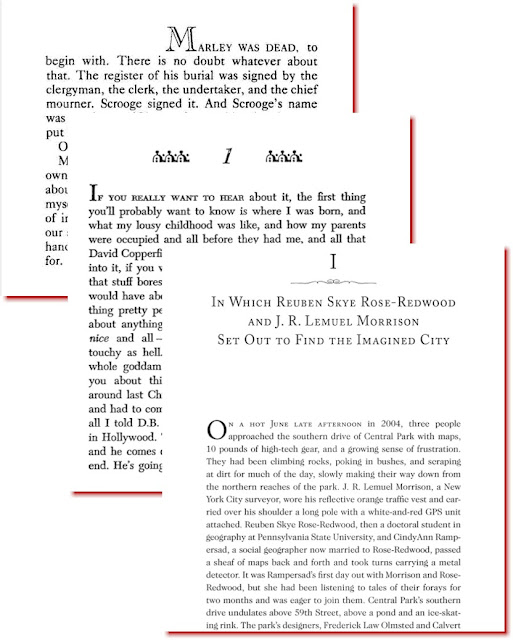 (above) Small caps often follow raised caps or dropped caps in chapter openings. You can left-click on the image to enlarge it. Maybe you'll recognize the books.) 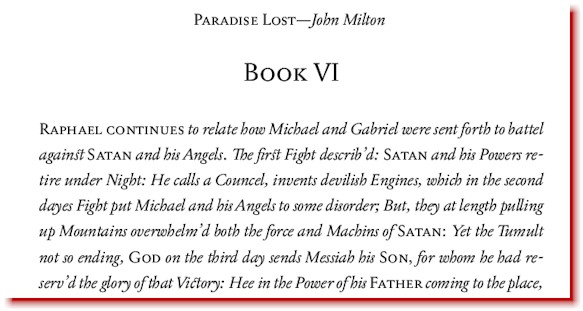 (above) This page from Paradise Lost suffers from an overdose of small caps. Why does "Satan" get the special treatment, but not "Angels" and "Messiah?" 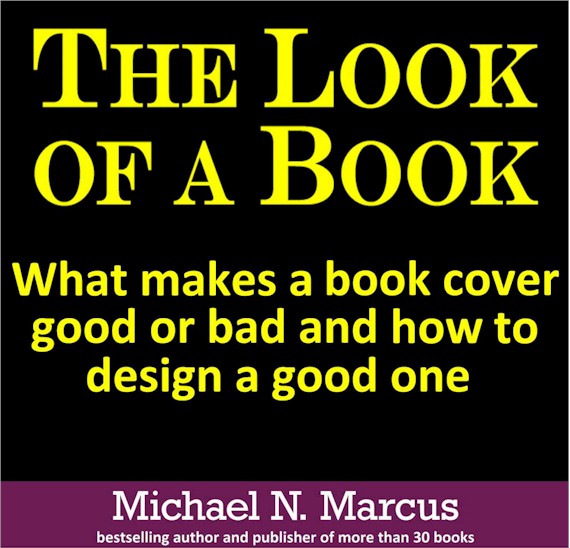 (above) This is the cover The Look of a Book, an ebook I wrote, designed and published. It's the first time I used small caps on a cover and I like the way it looks. I particularly like the way the tips of the "H" and "E" in "THE" butt together, and the way the "O" nestles into the "K" and "F" in "LOOK," "OF" and "BOOK." I think this treatment is much more attractive than ordinary upper and lower case lettering would be.

When you self-publish you can even change a title to take advantage of the way type looks. Publishing freedom is wonderful and powerful. 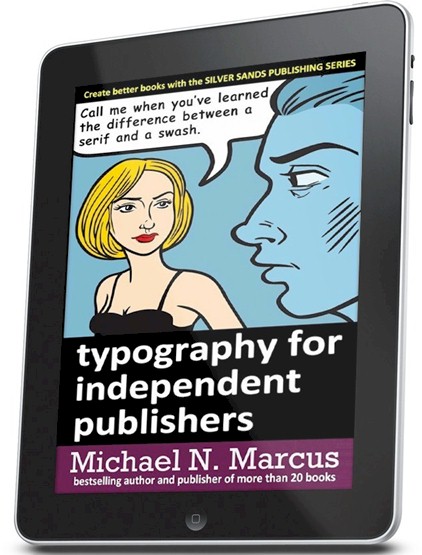 This posting is based on material in my upcoming Typography for Independent Publishers.