Should I give a shit about potty-mouth John Green?

According to the Huffington Post, "John Green is a cult author with more than 1.5 million Twitter followers."

Big Fucking Deal. I have Twitter followers -- and I don't tweet. My followers are either robots or idiots. How many of John Green's Twitties are human beings who actually buy books?

According to England's Guardian, he's a "a social-media sensation."

Maybe he's not so sensational.

I've never read any of his books, followed his Tweets or watched his videos. In fact, I never heard of John Green until this week when he started making news and noise.

He said he would not have any books to his name "Without the tireless and committed collaboration" of his editor and agent, the staff at Penguin and the thousands of other people, copy editors, warehouse employees, programmers, people who know how to make servers work, librarians and booksellers."

Actually, he could have been published without them (and without the truck drivers, too).

The speech, which thanked booksellers, was delivered at a meeting of The American Booksellers Association which gave him an award.

He dissed and dismissed self-publishing, describing the notion that he doesn't "need the value-sucking middleman of bookstores and publishers" as "bullshit.”

I say that Green is full of shit. Lots of authors get published -- and sell books, make money and entertain, inform and enlighten readers -- without those publishers and sometimes even without booksellers.

My first book was published by Doubleday in 1977. My second was published by a small "indie" 20 years later. I'm much happier with the books published by my own tiny Silver Sands Books. They're better books, reached more readers and I made more money from them.

At the time when self-publishing is finally getting respect, the American Booksellers Association and the media are paying too much attention to retrograde John Green.

Who cares who published your book?


Zoe Winters is an author and blogger. She says, “The average reader doesn’t care how a book gets to market. If the book is good, it doesn't matter if your Chihuahua published it.”  Author/blogger S.G. Royle wrote, “People don't buy books from publishers. They buy them from authors.” Edward Uhlan founded Exposition Press—an early and important pay-to-publish company—in 1936. He said, “Most people can’t tell the difference between a vanity book and a trade book anyway. A book is a book.”

On the other hand, many booksellers and book reviewers can tell the difference and do care—and may reject a book solely because of its publishing company.


If you decide to use a self-publishing company, this book will help: How to not get Screwed by a Self-Publishing Company. 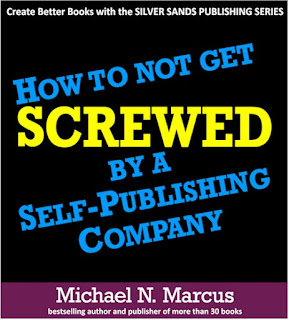