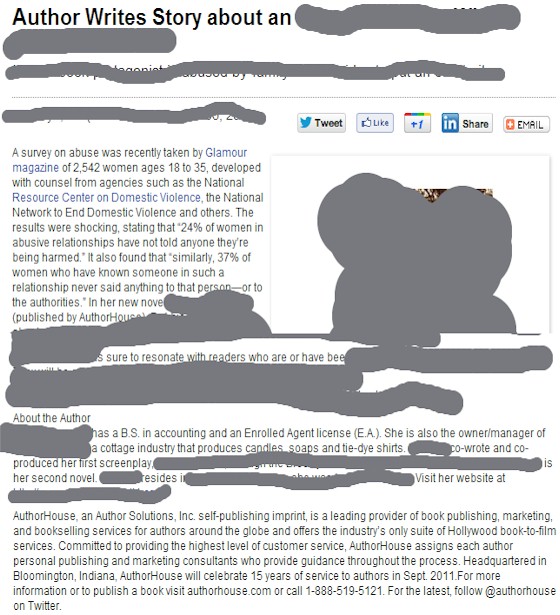 I have frequently written about the expansion of Author Solutions, Inc ("ASI").

It has become the pay-to-publish behemoth by gobbling up and combining former competitors such as Wordclay and Trafford and doing deals with traditional publishers including Harlequin and Hay House, and even Writer's Digest magazine. There are many complaints online about ASI from its author-customers and I wrote a detailed commentary about a particularly shitty book published by ASI's "top" Xlibris brand.

The ASI brands are distinctive for charging a lot of money for substandard work, and pressuring authors to spend more and more money.

Last fall I wrote about formerly respectable publisher Simon & Schuster doing a deal with the devil by setting up Archway Publishing, a pay-to-publish brand operated by ASI. Since then, ASI was bought by Pearson (owner of Penguin and other traditional publishers) for $116 million -- at about the same time that Penguin was merging with competitor Random House.

A few weeks ago I wrote about being offered a bribe to send customers to Archway.

Yesterday, on a website where authors hang out, an author publicized a recent book with a link to a press release. I took a look and almost puked on my keyboard.

I don't want to embarrass the author, so I have redacted portions of the release shown above. (If you feel like playing detective, you can find the original release.)

So, what's wrong with the release?

(0ne) The headline ("Author Writes Story about an ...") is pathetic! Unless your last name is Obama or Clinton, the mere writing of a book is NOT NEWS.

ASI press releases seem to be constructed to impress author-customers. That's the wrong audience. The releases are supposed to impress journalists and reviewers so they will help the author to sell books.

Only the most desperate small-town weekly would publish an article with the headline: “Local Woman Writes Book.” Your release needs a news hook. The hook is the main point of your release. It can be a theme, statement, trend or event on which you “hang” your news release. It’s also a hook with delicious bait on it that you hope will attract the attention of writers, reporters and editors.

To grab the attention of news people, you have to think and act like one of them. You need to be a partner, not just a salesperson. Think like a news writer -- not a book writer. If you were reporting news, what would interest you and your readers? A press release should be newsworthy and read like a news story -- not an advertisement. It should adhere to fundamental journalistic standards, using the five W’s and one H (Who, What, When, Where, Why, and How).

You have only a few seconds to capture the attention of a busy writer or editor. Make your headline interesting, stimulating and clear. Be sure your first paragraph covers all of the important information -- and makes people want to read more.

Keep in mind that the customary objective of a news organization, or even one writer, is to make money by informing and entertaining readers. (That’s your objective, too.) News organizations do not exist to help you publicize your book, but if you can do something to help them (i.e., provide some news or entertainment), you can work together for mutual benefit.

So, if the actual publication of your book is not the news, what can you say about it that is news? It’s great if you can hang your story on a hook that already exists. If an important person just got married, promoted, fired, elected or killed, a book about that person should be newsworthy -- especially if you have something new to say. If your book takes a contrary view, such as that cigarettes are healthy or bathing is unhealthy, that may draw attention.

(Two) The bulk of the first paragraph has nothing to do with the book. The last sentence in the "graf" does mention the book -- and has a plug for Author House. Publisher plugs do not belong in a news release for a book.

(Three) The release says the book is "sure to resonate with readers." That phrase may be appropriate for a book review or an ad. It is not newsy and does not belong in a news release."  If someone famous said that abut the book, then it's OK to quote the statement in the release.

The hackneyed phrase is regularly used by  ASI's "professional writers" (i.e., people who wrote for school papers in the Philippines) in many press releases.  After being offered hundreds of thousands of dollars in tax benefits by its home state of Indiana, the company has fired American employees and is building up its staff in the Philippines. 
I'm all for full employment and economic development all over the world, but it seems strange that a company "headquartered" in the USA is owned by a British company and most of its employees are apparently in the Philippines.

(Four) The "about the author" section tells about the author's academic achievements and business activities that have ABSOLUTELY NOTHING to do with the book.

(Five) The final paragraph is blatant advertising for AuthorHouse -- paid for by the author!

(Seven) Authorhouse says it "distributes the press release to more than 30,000 opt-in journalists and more than 250,000 news subscribers through our newswire service PRWeb." The author apparently paid $1,299 for the release. Based on my research of key phrases, in fourteen months the release has been "picked up" by exactly six websites (far fewer than 280,000).

You don't need AuthorHouse to send out a release through PRWeb. You can go direct for $159 to $369. I don't know how much Author Solutions pays, but they might get a nice quantity discount.

If you can research and write a book, you can write your own release for free. For help, read The Complete Guide to Book Marketing by David Cole and The Savvy Author’s Guide to Book Publicity by Lissa Warren.  Both books cover much more than just writing a release, and belong on every author’s bookshelf.

And now, my final paragraph is a plug for my ebook about press releases: 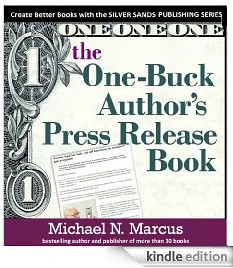