I had various jobs in retail while in high school and college. I was not paid well but I generally enjoyed my work and learned some good lessons for life.

I heard some good stories from the old-timers I worked with, and had a few experiences worth telling to others. When I heard about  A Word About Working in Retail  -- an allegedly humorous book about working in retail -- I ordered it.

If I wanted to be nice, I'd say that the book is a joke.

But, after receiving the book, I'm not in a nice mood. Therefore, I'll say that the book is a sham, a con, a complete ripoff, an ugly piece of shit, and not at all entertaining or informative.

Most of the pages have nothing but a page number and the word "don't" printed on them. Some pages also show crappy pictures of shopping carts in parking lots.

The typography on the back cover and on the few pages that have more than one word of text is absolutely atrocious. The book was apparently designed by a blind retard, and should never have been printed. This is one more in a series of bad books from the frequently inept and dishonest Outskirts Press. The book is promoted, as usual, by a terrible press release and worthless web page. 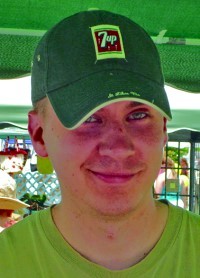 to John Andersen,
Perpetrator of literary fraud:
FUCK YOU!

to Brent Sampson,
Publisher of shit, enabler of Andersen:
FUCK YOU, TOO!

Brent's competitor, Lulu.com boss Bob Young, told Publishers Week­ly that “We publish a huge number of really bad books.” It looks like Brent is trying to keep up with Bob.
Posted by Michael N. Marcus at 3:10 AM