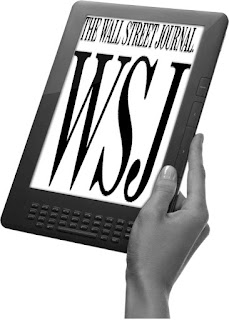 (excerpts re-posted from the WSJ without permission. Will Rupert Murdoch sue me?)


The E-Reader Revolution: Over Just as It Has Begun?
By GREG BENSINGER

Dedicated devices for reading e-books have been a hot category for the past half-dozen years, but the shrinking sizes and falling prices of full-featured tablet computers are raising questions about the fate of reading-only gadgets like Amazon.com Inc.'s original Kindle and Barnes & Noble Inc.'s first Nooks.


One problem is that some users who bought e-readers see no particular urgency to buy another. Julie Curtis, a substance-abuse counselor in Stow, Ohio, says she is devoted to her two-year-old Kindle. "It works fine, I really have no reason to get a new one," she says. "If I did ever want to upgrade, it would probably be to a tablet, like the Kindle Fire," she adds.

E-readers seemed revolutionary when they came into vogue in 2007. They allowed users to store and read hundreds of books on a device that was lighter than many hardcovers and took up much less space. In addition, digital books cost less to buy.

In the intervening years, e-reader designs improved. The devices looked sleeker, they were easier to read, they weighed less, their pages turned faster, and they held more books. Wireless capability allowed users to download novels, magazines and newspapers wherever they were, whenever they wanted, and now the devices allow for reading in the dark.

But tastes and technology have moved on. People haven't stopped reading. They are just increasingly likely to read e-books on tablets rather than e-readers, according to a recent Pew Research Center report. The polling firm found that 23% of Americans said they had read e-books in 2012, compared with 16% in 2011.

And ever cheaper tablet computers can be used not just as sophisticated readers but also as Web browsers, game consoles and cameras. "For most consumers, a multi-use tablet is a better fit, particularly at the price points at which tablets can now be had," says Tom Mainelli, IDC's tablet research director. "E-readers will eventually become a niche product."

The price gap for many tablets has also narrowed, making them even more attractive to consumers. Google, for instance, sells a version of its Nexus 7 tablet for just $199, and Amazon now offers a $159 model of its Fire device, which is $20 less than the most expensive Kindle e-reader and $40 more than the priciest Nook. And the arrival of the iPad Mini recently brought the entry price of Apple tablets to $329, down from $499 at the original iPad size.

On Thursday, Barnes & Noble said that revenue at its Nook segment—which includes both tablets and e-readers, as well as digital content and accessories—fell 13% from a year earlier to $311 million for the nine-week holiday period ended Dec. 29. The company doesn't detail sales for specific devices.

Despite the trends, dedicated e-readers have some selling points. They tend to be lighter than most tablets, and a different style of display improves their battery life. Barnes & Noble says the low-end Simple Touch version of its Nook line can operate up to two months on a battery charge, compared with around 10 hours of reading on its Nook HD tablet.

There have also been major improvements in e-readers, including touch-screen technology and self-lighting screens. "E-readers are dramatically better today than they were even two years ago," says Avi Greengart, an analyst at Current Analysis.

Moreover, e-reader prices have fallen sharply, with Kindles starting as low as $69 for a model that comes with ads.

I never bought an ordinary e-reader. I bought a first-gen iPad, and a first-gen Kindle Fire. All the recent e-books I've published are in color and have hyperlinks. The world is a colorful place and technology has moved on, beyond merely replicating monochrome printed pages.