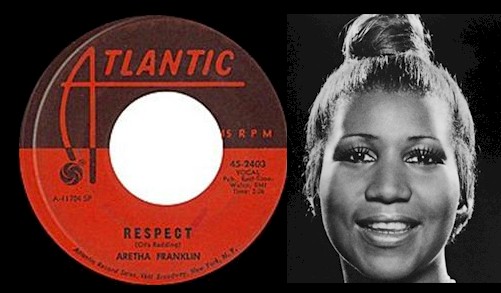 The one song most identified with Aretha Franklin is her 1967 hit "Respect" (which was originally recorded by Otis Redding in 1965). Wikipedia says: "it was written by Redding for Speedo Sims, who intended to record it with his band, the Singing Demons. . . . Producer Jerry Wexler brought Redding's song to Franklin's attention. While Redding's version was popular among his core R&B audience, Wexler thought the song had potential to be a crossover hit and to demonstrate Franklin's vocal ability. "Respect" was recorded on February 14, 1967 with Aretha's sisters, Carolyn and Erma, singing backup. . . . Franklin's cover was a landmark for the feminist movement, and is often considered as one of the best songs of the R&B era, earning her two Grammy Awards in 1968 for "Best Rhythm & Blues Recording" and "Best Rhythm & Blues Solo Vocal Performance, Female", and was inducted in the Grammy Hall of Fame in 1987. In 2002, the Library of Congress honored Franklin's version by adding it to the National Recording Registry. It is number five on Rolling Stone's list of The 500 Greatest Songs of All Time. It was also included in the list of Songs of the Century, by the Recording Industry of America and the National Endowment for the Arts."

The lyrics, directed by a woman to a man, include this line: "All I'm askin' is for a little respect" and this one: "Ooh, your kisses, Sweeter than honey, And guess what, So is my money." 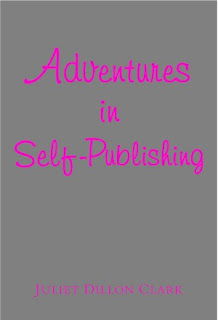 The ugh-lee cover of Adventures in Self-Publishing by Juliet Dillon Clark is an insult to its readers. I don't care if a book sells for just 99 cents, the author has to have pride in the appearance of her product and respect for her readers.

The first page of the book starts with Juliet's experience with the editor of a previous book: "When I received the edited version back, I was horrified to discover all the errors." She also says, "You need your book edited and formatted" and "You need to have your manuscript edited. In addition, it should be proofread after it is formatted."
﻿     That sure sounds like Juliet realizes how important editing is, but "Adventures" is apparently unedited. There are abundant problems including bad grammar, bad spelling, bad hyperlinks, improper punctuation, missing words and awkward sentences.
There are also factual errors such as:​
Since this book is so inexpensive, a purchaser won't waste much money -- but will waste time. Juliet has valid information to provide and important experiences to describe. I hope she'll follow her own advice and hire an editor. A professional cover design would be a good investment, too. With some effort, the book could be worth more than 99 cents. 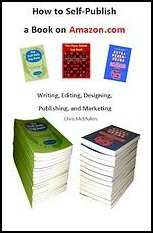 How to Self-Publish a Book on Amazon.com by Chris McMullen is another example of disrespect for the reader, coupled with both ignorance and egomania. Chris tells us: "If you can write your own book, you can surely design and make your own cover - and a good one," "I recommend that you make your own book cover" and "You can make a professional cover using Microsoft Word."
I've looked at a great many book covers, and Chris's is one of the worst I've ever seen. DO NOT follow his advice.
Sadly, Chis does have some good advice and information inside the book, but it's marred by bad typography and obsolescence.  Chris should spend some money and time to make this a first-class book -- maybe one that could sell for more money -- or kill it.

It's especially sad and ironic that some of the worst self-published books are books that try to teach people how to self-publish. Authors of these books need to be taught some respect -- for their readers, and maybe for themselves.

-  -  -  -
I thank Otis Redding for writing the lyrics quoted above and hope I won't be sued for publishing them here.