OK, I've tried writing fiction, or at least part-fiction. Is a song next? 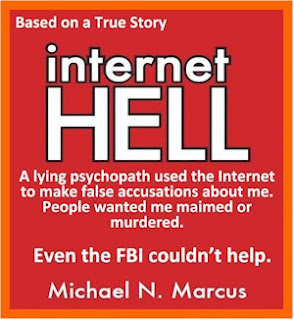 I recently wrote a blog titled "Write something you hate to write about or think you can't write."

I’ve been writing professionally for over 40 years, but until now, only nonfiction (except for one short chapter in my memoir).

In college, I majored in journalism. I took no courses in creative writing. I never wrote for high school or college 'literary' magazines. I never planned to write 'the great American novel.' With no 'formal training, for the first time I had to create scenes that never existed outside my mind, and invent dialog for people who never existed.

I enjoyed the liberty of having almost no limits.What I write must be believable, even if it’s not entirely true.

Some of you may remember that in the summer of 2010 I was the victim of an elaborate defamation attack on Facebook and elsewhere on the web.
I was falsely accused of many horrible crimes including child molestation and rape.The attacker tried to have me put on a registry of child molesters, wrote letters to newspapers, tried to stop my books from being printed and sold, and published a picture of my house on a smear blog with my address and directions so people could get to me.

People called for my incarceration, killing and castration.I worked with police and the FBI. The perpetrator was never positively identified or prosecuted, but I think I know who he is.

I've just published an e-book with the factual story of the attack (complete with screen shots), plus a fictionalized back story about my presumed attacker.

The $2.99 e-book also tells how I dealt with the attacks, and provides advice for people who are similarly attacked.


You can read the book on a Kindle, iPad, PC, smartphone or other device. Price is just $2.99. Available at Amazon.com.

So, now that I've written nonfiction and fiction, what's next. Will I try poetry, a play, a song? Who knows?
Posted by Michael N. Marcus at 3:34 AM