Obit for a first-class self-publishing service

Regular readers know that I've criticized many self-publishing companies. Back in June of 2010, I was pleased to write a complimentary blog post about Vantage Press. I called Vantage "a refreshingly honest and competent pay-to-publish company."

While others in the field competed on price ("We'll publish your book for just $195!"), Vantage preferred the high road, competing on quality, even if it meant charging authors much more than $195.

Although I never used Vantage, I paid attention to what it was doing and got friendly with David Lamb who took over the ancient company a few years ago.

He visited me in Connecticut and bought me lunch. We had a long talk about the future of self-publishing and our views of its problems and promise. We communicated frequently by email, and I chatted with David and his wife Selina at Self-Publishing Book Expos for three years. She's second from the right in the photo below, next to David. Here's the story about their meeting and wedding. You have to be important to have your love life covered by the N Y Times "Style" section. 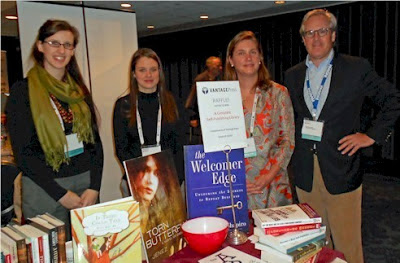 At the SPBE in October, Selina told me that most of the Vantage operation would be moving from Manhattan to Great Barrington, Mass. where the Lambs live. I assumed the move was due to a desire by David and Selina to not have a long three-state commute each day.

Lots of businesses move out of Manhattan. Many corporate HQs left Manhattan and are now based in Greenwich, CT, where the drive from the bosses' estates is just a few minutes. Office space in Great Barrington presumably would cost much less than in Manhattan, or Greenwich.

A few weeks ago I started to hear unpleasant rumors about Vantage, and I detected unpleasant signs. It's website was offline, its Facebook page was dormant and some authors complained about non-payment of royalties and un-returned phone calls. My own emails to David were unanswered.

Vantage has gone out of business.

The causes may be debated for years, but I'll offer a few possibilities:

Mick Rooney, operator of The Independent Publishing Magazine has provided extensive analysis and coverage of Vantage's demise. Here's a link and another. And here's the report at Publishers Weekly.

If you have published with Vantage, or merely want to be kept up to date on the situation, join the Facebook Group that Mick has set up for Vantage authors.

I wish the best for David and Selina, and for authors who have been hurt by Vantage's closing (and authors who may be hurt by other publishers). I hope you will be able to find another way to reach your readers.

I fear that this episode may encourage other self-publishing services to keep cutting costs by cutting quality.

Authors, please learn to recognize crappy books. Don't tolerate them and don't let your name go on them. Respect yourself and demand respect from companies that provide service to you.

This is probably an appropriate time to plug my Get The Most Out of a Self Publishing Company. David liked and recommended the book. 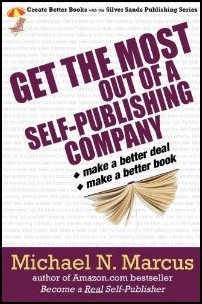