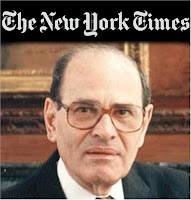 The many tributes to Arthur Ochs Sulzberger, who died Saturday, have prominently included his defense of the nation’s First Amendment freedoms and the Jeffersonian ideal of a free and independent press, and rightly so. Saving The New York Times from near-collapse in the 1970s by strengthening its financial base and diversifying its content was itself a significant contribution to the vitality of American journalism. Equally important was Mr. Sulzberger’s unyielding battle against government censorship and intimidation.
The Pentagon Papers case is the best known among the many tests of those freedoms during his stewardship as The Times’s publisher. But one cannot talk about the First Amendment without also talking about The New York Times v. Sullivan, a libel action brought in 1960 by an infuriated city official in Montgomery, Ala., against four African-American clergymen and The Times for a full-page ad that accused some Southern officials of a “wave of terror” against black students.
The Times fought the case all the way to the Supreme Court. In 1964, in a landmark opinion written by Justice William Brennan Jr., the court ruled that in the interest of “uninhibited, robust and wide-open” public debate, officials could not collect damages unless they could prove “actual malice” — that the press had acted with reckless disregard for the truth. The effect of the ruling was to set a very high bar for libel suits while freeing the press to report without fear of punitive damages on the racial injustices endured by Southern blacks.
A self-effacing man, Mr. Sulzberger could be tough when he had to be, and he especially did not like getting pushed around by governments. In the 1960s, for instance, he listened to and politely rebuffed entreaties by Presidents John Kennedy and Lyndon Johnson, two famously persuasive people, to soften the paper’s coverage of the Vietnam War. But publication of the Pentagon Papers presented uncharted dangers; The Times’s outside counsel warned Mr. Sulzberger that the paper’s reputation could be gravely damaged and that the publisher himself might go to jail.
Much to the delight of his senior editors, but only after considerable soul-searching, Mr. Sulzberger gave the go-ahead. Again he received vindication from the Supreme Court, this time in a landmark ruling upholding a newspaper’s right to publish in the face of attempts to impose prior restraint. The paper was awarded the Pulitzer Prize, but, far more important, the cause of an independent press was once more secured.
Mr. Sulzberger wrote later that “we are going to look back on these days as some of the most exhilarating in the history of The Times.” History will look back on those days as no less crucial for a free press and for the constitutional safeguards that make it possible.
Posted by Michael N. Marcus at 5:06 AM