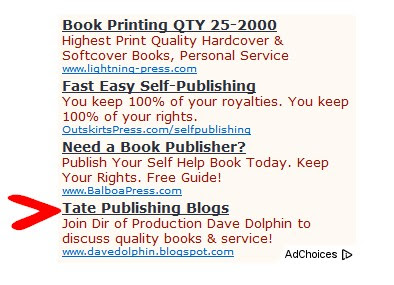 A few months ago I started allowing Google to present mini ads on this blog. I make a few bucks. Sometimes I click on ads and discover worthwhile products and services. The ads are part of Google's "AdSense" program and are usually selected by the Google robot based on the websites that visitors to this blog have previously visited, or the content of this blog. Sometimes the ads are random.

I admit to being amused when ads are shown for Outskirts Press -- the company I most often criticize on this blog.

A recently noticed an ad for a blog promoting Tate Publishing. I've never used Tate and have no reason to think it's much better or worse than others in the field, so I clicked to follow the link.

The blog was written by Dave Dolphin, "the Executive Director of Technology Solutions for both Tate Publishing and Tate Music Group. He has been with the company since the initial beginnings of both organizations and continues to be amazed at how fast they've grown. Dave oversees all projects that aid in making the company and its services better through technology."

I was surprised to find that there was no current blog posting, and not even one for this year. There were just two for the entire year of 2011, and just 18 for three previous years. Tate is paying money to direct potential customers to Dave's void. That's stupid. 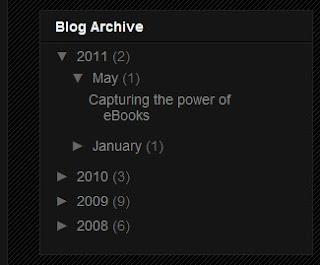 We are in an extremely tumultuous and exciting era in publishing, yet Dave from Tate has almost nothing to say, and Tate foolishly spends money to show the world that it is ignoring its business.

At other times the Tate ad leads to a blog written by Tate's Executive Editor, Curtis Winkle. We're now in the second half of 2012, and Curt's most recent blog was posted in January. Curt posted just six times in 2011.

On another day, the Tate ad linked to the blog of Tate president, Ryan Tate. Like his employees, Ryan cares little about blogging or the benefits of advertising. His blog has just one entry for 2012, three in 2011 and five in 2010.

Strangely, although Dave's and Curt's sparse blogs exist to promote Tate Publishing, there are no links from the blogs' home pages to the company's website. I'll do the job for Dave and Curt. Here's a link to Tate.

The Tate Company is anything but modest. It decrees that it is "AMERICA'S TOP PUBLISHER" but offers no explanation for its ranking.