Can you really produce a decent book with Microsoft Word? 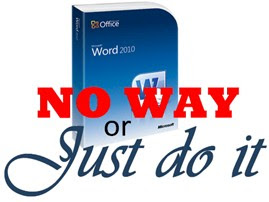 Book expert and self-described curmudgeon Dick Margulis said, “Word is not a page layout program. It is a word processing program. . . . it is best suited to preparing a manuscript, not laying out pages.”
Graphic designer Michael Dyer agrees: “Don’t use Microsoft Word to lay out your book! . . .  the results just don’t measure up. . . . Word’s ability to handle text for print does not compare with any of the page layout applications and it shows in the final product. . . . If you want your book to look professional you need to use professional tools. . . . Some might not notice the quality of your book design and typesetting, but many people in the industry will. Do you really want to put your project at that kind of disadvantage? Either hire a professional to lay out your book or buy the software and learn how to do it correctly yourself.”
Printer/designer/author/advisor Pete Masterson advises: “Microsoft Word is not an appropriate program to lay out a professional quality book. Word, and other word processing programs do not have the correct features or programming to produce food quality typesetting with good letterspacing or wordspacing.”
SelfPublishing.com provides Word templates for its customers, but warns: “The Do-it-Yourself method is not recommended if you are thinking of printing more than a couple hundred books. It is not that expensive (in most cases $250) to have your text professionally formatted. Homemade is fine for small print runs. It will probably not, however, work in the mainstream publishing world. You are kidding yourself to think otherwise.”
On the other side is Zoe Winters, an excellent author and a Facebook friend of mine. In Becoming an Indie Author, she says: “Typesetters will probably notice if you use Word or Open Office. . . . Your audience is not professional typesetters. . . . If you can make your interior layout professional and non-distracting to your actual readers, then you have done your job. Anyone else who wants to say anything about it can say it, then go back to picking their nose and nay-saying. It’s pointless to try to impress people you don’t even like and who are not part of your demographic. You need to pull a Rhett Butler and be selective about whose opinion you give a damn about.”
Book designer/author/blogger Joel Friedlander has a compromise position, and hope: “Typesetting with a word processor is never going to give you the smooth color, sophisticated hyphenation, and fine control over your type that you can get with a professional-level program. But by picking the right typeface at the beginning, you’ll ensure that your book can be readable and conform to long-standing book publishing practices. And that’s no small thing.” He also said, “. . . the books we see that look bad, only look that way because the author couldn’t work out how to make it look the way it ought to. . . . It isn’t because of the tool that was used the create them.”
I've used Word to make more than 20 books. They probably don’t look too much worse than books that were composed with Adobe InDesign or Quark Express, which are used by traditional publishers and some self-publishers. Ironically, some of the ugliest books I've ever seen were formatted with InDesign (and some of the ugliest were formatted with Word). Knowing how to use ‘professional’ software doesn’t mean someone recognizes or is capable of good design.

The page above was formatted with InDesign and is from a book about using InDesign.The multiple typefaces, mixture of margins, lack of hyphens, distracting squiggle and light bulb icon make it a chore to read.

For contrast, the page above is from The FOB Bible, designed by Moriah Jovan with Word 2000. Some of the wordspacing seems oversize, but overall, the page is beautiful
Many self-publishing companies endorse the use of Word. 48Hr Books says, “We now have Free Templates for Microsoft Word, Word Perfect, Open Office, Pages or just about any other word processor.” Bookstand Publishing and CreateSpace provide similar templates—but if you can use Word, you shouldn’t need a template.
The ‘adult’ software can cost as much as $849 and can take a long time to learn how to use properly. I’ve done some test pages with InDesign and have been planning to try it for a future book — but I’ve been planning that for two years and still have not used it. I am happy enough with Word.  I could probably write a book and format it in Word in the time it would take to learn how to use InDesign properly.
Additionally, much (or maybe even all) of the advantage of using professional formatting software is lost when producing e-books, which are becoming increasingly important in the publishing business — especially for independent publishers.
And finally, most writers already own Word and know how to use it. They can quickly learn how to use some of its often-untapped power to produce a manuscript that’s nearly ready to become a book.
Both time and money are usually limited for independent authors. If you have an unlimited supply of both, sure, go ahead and buy InDesign and learn how to use it. If you do have limits, my new book (below) will tell you how to make better use of the software you already own.

The weaknesses of Word

The test page above was composed with Word using 16-point Constantia type, with no modifications.