More from Book Expo: how chick-lit led to publishing books for gay guys 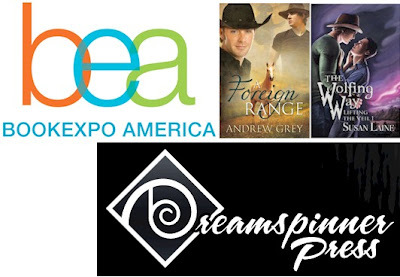 It seems like I've been attending trade shows and conventions for most of my life. As a young child I often accompanied my father to the mens' clothing shows at the Hotel New Yorker, where I collected lots of pens, key chains, candy and other "loot." In later years, I loved the food show, advertising premium show and the (wacky) inventors show at the New York Colosseum, and the Consumer Electronics Shows in New York, Chicago and Las Vegas. The final Comdex in Atlanta was a disappointment, but the food was good.


One important lesson I've learned from decades of show-going is that some of the most interesting products and services are shown in booths that are at the far edges of the show floor, and/or which I have no legitimate business purpose for visiting.


That was the case at Book Expo America last week when I noticed and stopped at the exhibit of Dreamspinner Press, purveyors of "quality m/m romance novels, novellas, short stories and anthologies."


I've been a happy heterosexual since I first noticed sex, and have never written nor read a "gay book" and probably never will. I'm researching a book about book design, and was attracted by a wall filled with great book covers. Only on close examination did I realize that most of the covers had two men on them. There seemed to be more horses on covers than women on covers. 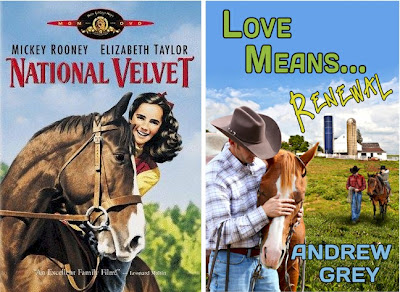 Apparently, horses are very popular with gay men -- and 12-year-old girls. Maybe they're simply popular with lots of people. I was once bitten and stomped by a horse I was trying to train, but I get along just fine with Hunter, my golden retriever. I've never been kissed by a horse, but Hunter is an excellent kisser, and I am able to suppress the facts that he is (a) male, and (b) not a human being.


As a supporter of equality, civil rights and all the usual leftie/liberal/progressive goals, I was pleased to see a publisher of gay romance in the middle of the show floor, and I wondered how it happened.


There were no gay hunks manning the booth, but there was an attractive woman. Sadly, her name is not on the business card she gave me, but maybe I'll be able to update this post later. The mystery woman told me that she has a gay relative and was surprised to see him reading a romance published by Harlequin -- a company known for "bodice rippers" and other chick lit.

The gay guy explained that he preferred the Harlequin books (despite the presence of females) because they have happy endings, but most gay fiction is tragic.

And so, an idea was born and Dreamspinner opened for business.

Apparently there was a big need, and authors and readers quickly found the company. Through Book Expo, Dreamspinner was reaching out to the broad range of booksellers.

I was surprised to learn that lots of M/M books are written by women, and that M/M lit includes about as many genres as straight lit.

The company says: "We encourage tales that cross genres; for example, a science-fiction mystery or romantic fantasy. Stories can stand alone or be part of a well-developed series.