To err is human, but that doesn't make errors OK

English poet Alexander Pope (1688-1744) ) wrote “To err is human; to forgive, divine.” I'm far from divine, and I find errors more amusing than forgivable, especially if they are avoidable. Most errors I find could be avoided if people (including me) tried a little bit harder, or had someone to help.


No writer should be her only editor. Even professional editors who write books should hire other editors. It’s not just a matter of errors in spelling or grammar. You may have words in your mind that you think are on the page, but are really not there. 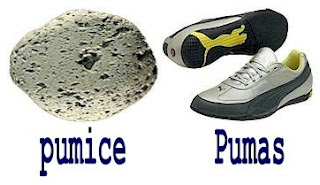 Since I am human, I, too, make silly mistakes (but never stupid mistakes). ...
Posted by Michael N. Marcus at 6:33 AM