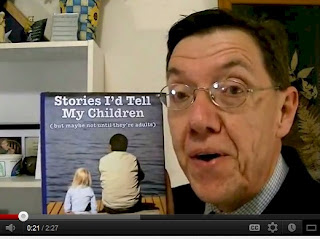 YouTube videos are a basic part of modern book promotion. I prefer to communicate with words on paper or on electronic pages and have been reluctant to go on camera, so I paid a "preacher" to perform for me.

I've long been a fan of evangelical doomsayers and bible thumpers. My first enthrallment occurred in San Francisco in 1961. The preacher sung-shouted, "If the good Lawd tells you not to wash your fee-it, you had bettah keep your fee-it dur-tee, my brothers!"

My hired preacher says he usually reads the Bible but has discovered another "good book" -- MINE. He says it might even save your life. (Watch the video to learn how.)

If you like the video, you'll probably like the book. It's available as a hardcover, paperback and e-book. Tell one. Tell all. Praise the Lord, and please praise the book. Amen.

This is the second "take" of the video and corrects two errors from the first one. Unfortunately, this time the preacher forgot to mention my name -- which is in the first version. It's annoying, but not a sin.

I learned with books -- and with wedding invitations and answering machine announcements -- that any time a correction is made, other errors are often created, so I decided to let it go.


Marilyn and I got engaged back in 1971, slightly after Brontosauruses stopped stomping on the Earth. Her cousin Manny was a printer, and he offered us free invi­tations as a present. Unfortunately, they were printed with my father’s given name -- that few people would recognize -- in­stead of his well-known nickname. When Manny reprinted them, he got Pop’s name right, but he printed the wrong year.

We didn’t want to ask Manny for a third freebie or insult him by taking our business elsewhere. (He kept a gun strapped to his ankle and I used to refer to him as Mafia Manny although I had no real knowledge that he was in the mob.) The wedding date was rapidly approaching, so my future mother-in-law used a pen to correct the year on each invi­tation. It wasn’t elegant -- in fact, it looked like shit -- but it was definitely a rare collector’s item.

The imperfect video is neither rare nor a collector's item, and I don't think it looks like shit. Previewers said it's funny, and that's what I wanted it to be.

Please check it out. If you like it, please pass the word. Thanks.

BTW, the imperfect invitation was just one of many fuckups at our wedding. The full story is in the book.