A stupid book about stupidity, from Outskirts Press, of course 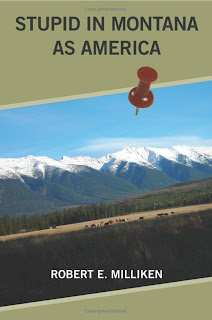 Initially I thought that the following book promotion by author Robert E. Millikin was an effort at parody, Sadly, it seems to be serious.

For thirty years, I had wrestled with the bible prophecy that in the end times the majority of the people will take the mark of the beast when it would be stupid to do so.

Then in April 2009 at three thirty in the morning it finally accurd to me why they do it, and it is because that is exactly what they are, stupid.

In my book Stupid In Montana As America at amazon.com, I summarized that as the Global population of the human enterprise increases, people will get dumber and less concerned with a lower level of awareness, which is progressive math.

At the beginning of this year, I stated to maltible people that the Global Population would increase by one hundred million by the end of August and at that time we were at six billion eight hundred, eighty nine million and some change with an increase of approximately ten people every five seconds. A pretty good guess considering I missed the mark by only two weeks.

Right now, we are at six billion nine hundred, ninety two million and some change with an increase of approximately ten people every four seconds. We will have grown by one hundred million in eight months and two weeks.

Now, using this progressive math in consideration that math is the most exact science we know of, in consistency with the math of the decreasing level of intelligence and concern

I am formulating that by the year twenty fourteen or maybe twenty thirteen we will see the appearance of the one the prophet John called the Anti Christ. In addition he will begin what I think will be the processing of the people on a Global scale and by the year twenty twenty we will experience world wide mass extinction.

Math does not lie, and with this math I am calculating that the conditions for the end times of which the Prophet John spoke of, will be ripe.

So overall, I am summarizing that for those people who have a large family of say four or more small children living at this time in the human experience are on the same intellectual level as a bunny rabbit, very unaware of the Population Monster which is looming over us all.

Even the Dalai Lama stated, that every life is precious, but quality is better than quantity.

So my message is, have a brain and do not breed like rodents.

My reaction: Virtually everything about the book and its promotion are either inept or wacky.


I could not resist. I spent $7.99 so I could examine the book.
Sadly, this book about stupidity is a great example of stupidity. It is really stupid to publish an unedited book. The author has some important things to say, but the impact is severely limited by the unprofessional presentation.

This is additional evidence (which is probably not needed) that Outskirts Press has NO STANDARDS and NO CONSCIENCE and NO PRIDE. As long as the company gets paid, it will publish anything.
...
Posted by Michael N. Marcus at 6:32 AM