(From a news report published the website of WNYC radio:)

The City University of New York's Board of Trustees approved tuition increases Monday as students upset with the hikes protested outside, chanting and holding up signs as they marched around the school.

The board on Monday voted to increase tuition by $300 per year for undergraduates, for up to five years. It was the second hike in a row. CUNY is able to make small increases every year to prevent larger ones every few years.

But 25-year-old Sarah Pomar, who is enrolled at Hunter College, said it's an increase that's still going to hurt.

"I think I either have to take less classes because I pay out of pocket or I have to get into more student debt in order to continue going to school for a degree that doesn't guarantee me a good job, actually," she said. 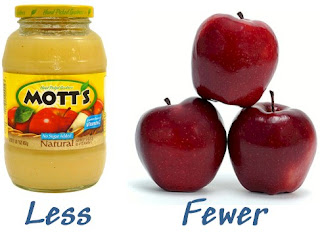 I hope that in some future English class, Sarah learns the difference between "less" and "fewer." “Fewer” applies to things that are counted (e.g., apples). “Less” applies to things that are measured (e.g., apple sauce or cider), or to concepts (e.g., freedom). You can have less wine, but fewer bottles and fewer drinks. You can have less time to travel, but fewer days for your trip.

My mother graduated from the same college that Sarah is attending. One of my nieces is in her junior year there. Another niece will start grad school there in January. A nephew and my father are CUNY graduates. So are Jonas Salk, Colin Powell, Barbara Boxer, Ruby Dee, Jimmy Smits and Jerry Seinfeld. So are Nobel and Pulitzer Prize winners. They all learned proper English -- probably before college. 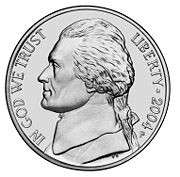 Sadly, Sarah Pomar needs remedial English classes, especially if she wants to get a "good job." I'd never hire someone who speaks the way she does. At one time CUNY was considered to be the Ivy League for poor people. The education was unbeatable and tuition was free. (I think even textbooks were free at one time.) My mother says that when she told her father that she wanted to go to Hunter, Grampy Jay said, "Good. Here's a nickel for the subway."
Today, the price of a CUNY education is much higher. Sadly, the admission standards seem to be lower.
...
Posted by Michael N. Marcus at 5:36 AM