Is this a serious effort at book promotion -- or a joke? 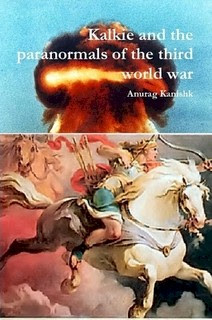 KALKIE and the Paranormals
of The Third World War

It is year 2055 and the whole world is grip with panic. There are thousands of death world over due to strange reasons. The first is brain cancer of a special type in which there is slow paralysis. Firstly the leg stops working, and then the hands stop working. Next there is vision loss and finally a person dies. The second major cause of death is snake bite. A special kind of snake had started appearing in parts of USA, Europe, Australia and India. The snake bites the people and people die within 20 minutes. The strange thing about the snake was that it was biting only important and successful people. The locations of snake bite were strange- sometimes in the bedroom, sometimes in the kitchen and sometimes even in the office. The people are baffled how snakes are appearing in such inaccessible locations. A team of experts and detectives gathered in Atlanta to discover the root cause of this menace. And what they discovered was startling. It lead to the third world war and kalkie- the defence minister of India plays a major role in establishing a new world order. The prophecies of Nostradamus come true and Mabus – the king of Terror is born. When Kalkie rides the white horse to defeat Mabus with the Bow in his hand, the people of the world are revered. They think that Kalkie is none other than avatar of Lord Vishnu.