Some of my books are printed by Lightning Source and some by CreateSpace (which is owned by Amazon.com).

I previously complained in this blog that CreateSpace was extremely paranoid about potential copyright violation. The company demanded that I show proof that I had permission to use every photograph I used in one book. I’ve never encountered this, or heard of this, with other publishers or printers. This delayed publication of the book and I had to delete and substitute some images. Maybe I should feel safer now -- less likely to be sued for copyright violation -- but I wasn't worried before.

With another book, CreateSpace did not question my photos, but rejected a book simply because it mentioned the name of corporate parent Amazon.com. I complained publicly and got a quick apolo­gy. Apparently, the robot censor was hyperactive and needed to be recalibrated.

The robot seems to have been stable for the last six months or so, but had a recent relapse.

A few days ago, I submitted a minor change to the front cover of my Stories I'd Tell My Children (but maybe not until they're adults). I made absolutely no changes to the interior text.

This morning I received this ominous warning: (left-click to enlarge)

The robot told me "We have noticed that the interior file submitted for this title contains text referencing Amazon.com on PDF page 314. In order to move forward, please update this text to include two additional outlets where your title is available."
The warning is weird for several reasons: 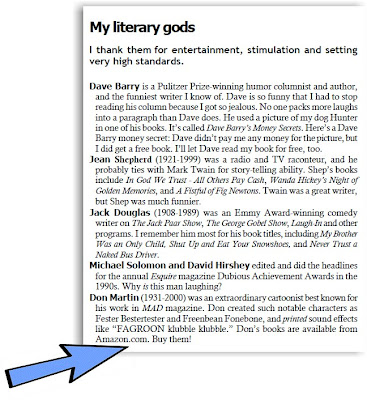 I'm waiting for an explanation from CreateSpace, and, while I am waiting for Robo to be restrained, my book is unavailable and I may be losing money.
...
Posted by Michael N. Marcus at 7:55 AM