The San Francisco Chronicle goes back to 1865. At one time it had the largest circulation of any newspaper on the West Coast of the United States, and it has won several Pulitzer prizes. The paper has experienced a huge loss of circulation, and reportedly has lost money every year since 2001. The Chron, owned by the Hearst Corporation, canned a quarter of its newsroom staff in 2007. It seems that at least one of the survivors has trouble reading and writing. 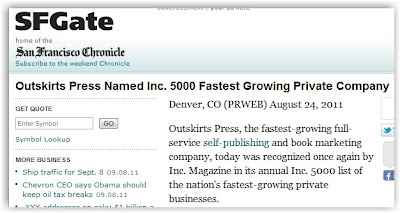 The paper's website recently ran the headline shown above, making the achievement of pay-to-publish company Outskirts Press seem much greater than it really is, with a headline telling readers that Outskirts is the best of the Inc 5000. Some editor should be fired, and banned from journalism for life.

Inc is a magazine for and about small business. In its August issues, the magazine recognizes the fastest-growing private businesses in the United States.  Businesses are ranked overall, and within such categories as health, construction and retail. 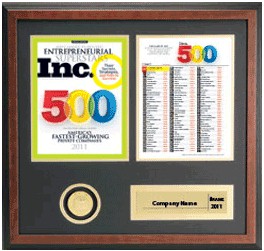 There are ample opportunities for honorees to brag, and the magazine provides free press release templates and not-free award trophies and posters (selling for up to $7,975 for a package of bragging doodads).

On August 24, often-inept and often-dishonest Outskirts Press distributed a press release announcing that "Outskirts Press, the fastest-growing full-service self-publishing and book marketing company, today was recognized once again by Inc. Magazine in its annual Inc. 5000 list of the nation's fastest-growing private businesses." The Chron published the release with an enhanced headline that makes it seem like Outskirts is rated number-one by Inc.


Unless you read Outskirts's press releases closely, you might not notice the additional zero in the 2010 and 2011 positions. Pathetic Outskirts had dropped out of the Inc FIVE HUNDRED to become one of the Inc FIVE THOUSAND.

Outskirts bullshits about the award with its claim to be "the fastest-growing full-service self-publishing and book marketing company."
Outskirts boss Brent Sampson bragged, "We are honored once again to be named to the Inc. 5000. This is a true testament of our commitment to quality, customer service, and value for our authors."

What Outskirts was not bragging about is that its Inc RANKING DROPPED BY NEARLY ONE THOUSAND PLACES IN ONE YEAR (and nearly three thousand places in two years).
I don't see the honor in doing worse in succeeding years, and in dropping from the top 500 to a group with ten times as many honorees. But, Brent Sampson doesn't need a legitimate reason to be a braggart and to issue unimpressive press releases.

Brent Sampson (who has the perfect initials) is aided by media that uncritically regurgitate his bullshit. It's very sad that no one at the once-respected San Francisco Chronicle reads as closely as I do.