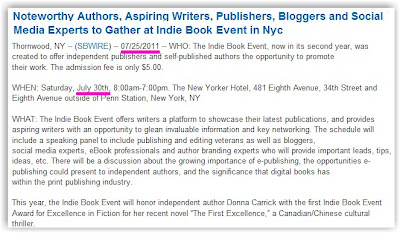 This morning I read a news release for the Indie Book Event, to be held Saturday, July 30th, at the New Yorker Hotel in Manhattan.

Now, I'm not a newbie in publishing (over 20 books so far), but I am always willing to learn. I might also have been interested in speaking at the event, or even exhibiting so I could promote my books about self publishing. Or, I might have helped promote the event on this blog.

The press release for an event to be held on July 30th was sent out on July 25th. In an earlier version of this blog post, I humorously suggested that someone at DDR Public Relations should be punished for sending out the announcement so close to the event. I carefully pointed out that the short notice could be the fault of the show management, not the PR agency.

Despite my willingness to shift the blame to her client, agency boss Dawn Dankner-Rosen was concerned about my possibly damaging her company's reputation. She pointed out to me that she got the assignment to promote the Event just two weeks ago.
Other similar upcoming events, such as Self-Publishing Book Expo, started promoting many months in advance.

A lot about the Event seems half-assed (see below), and I hope that a fine PR agency like DDR doesn't get blamed if attendance is small and money is lost.

I am reminded of an event that happened when I was in college. A friend and I operated a band booking and management company. On a Saturday, we were contacted by a representative of a well-known band that had a concert canceled on Sunday because of an electrical problem in the concert hall. We were asked to try to schedule a new concert on Sunday, and could potentially make a hell of a lot of money.

This initially sounded good, and one of our friends took an unscheduled shower and put on clean clothes. (This was the 60s.) We started driving to see the Dean of Students to ask if we could have the use of the stadium. After a few minutes, I stopped the car.

I told the guys that this was a suicide mission because there was so much to do in a very short time, and so many things could go wrong.

If everything went perfectly, we could get rich. It seemed more likely, however, that the event would be a disaster, we'd lose money, and lots of people would hate us.

It was a valuable lesson that I've never forgotten: sometimes the best business decision is to turn down business.

I hope Dawn does not regret accepting this PR assignment.

The announced events and participants just don't motivate me to put on decent clothes, and take a train into steamy Manhattan. In mid-summer, I'd much rather be in my pool, or reading or writing a book.

OTOH, if you're a writer and will be in Manhattan anyway, the Event is probably worth five bucks. The website shows a schedule with lunch at 12:30. Lunch is probably not included in the five-buck fee.