"Hey! You! Get off of my cloud."
Has Amazon glitch caused CreateSpace problem? 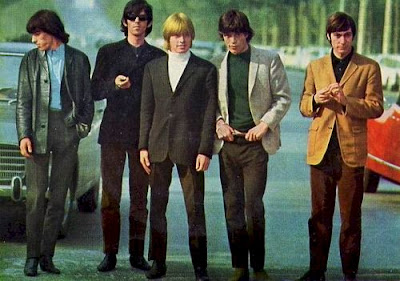 Way back in 1965, when the band was just three years old, the Rolling Stones recorded Get Off Of My Cloud (click to hear). Lyrics are here. The Stones are the greatest rock band ever. If you disagree, get off of my cloud.
Anyway, in the last few years, big tech companies including IBM, HP and Amazon started offering and promoting cloud computing.
As explained by the New York Times, "In business, the cloud model is rapidly gaining popularity as a way for companies to outsource computing chores to avoid the costs and headaches of running their own data centers — simply tap in, over the Web, to computer processing and storage without owning the machines or operating software."
Starting on Thursday, there was big trouble on Amazon's cloud. Their clients lost service, the public got pissed off, money was lost, time was wasted, and now businesses are wondering if they can rely on the cloud.
Despite powerful competition, Amazon became an early leader in cloud computing, selling its surplus computing power to those who need it, when they need it.
Again, from the Times: "Amazon has thousands of corporate customers, from Pfizer and Netflix to legions of start-ups, whose businesses often live on Amazon Web Services . . . . The problems companies reported varied, but included being unable to access data, service interruptions and sites being shut down. Amazon has data centers around the world, but the current problems have come from its big center in Northern Virginia, near Dulles airport. Amazon’s Web page on the status of its cloud services said on Friday that matters were improving but were still not resolved."
Among the many victims of the Amazon failure was Publishers Weekly magazine. As of 7:30 a.m. on Saturday, its site showed only this: 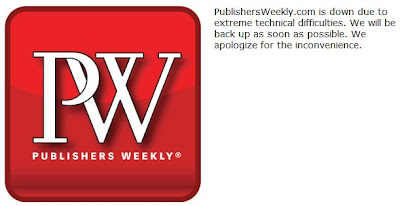 On Friday, PW sent out this email: "We want to apologize for the extended downtime on our Web site over the last day, which has also prevented us from sending our email newsletters.  Our site was affected by the Amazon Web Services outage, which you may have read about, and which has affected companies large and small; the New York Times and Wall Street Journal both have good explanations of what happened.  The choice of Amazon's servers was made by our IT consultants, who use Amazon for all of their other clients as well.  We are in the process of restoring our site and will have it up and running as soon as possible.  Thank you for your patience."
I use Amazon subsidiary CreateSpace ("CS") to print some of my books, generally books that I consider less important than those I have printed by Lightning Source ("LS"). 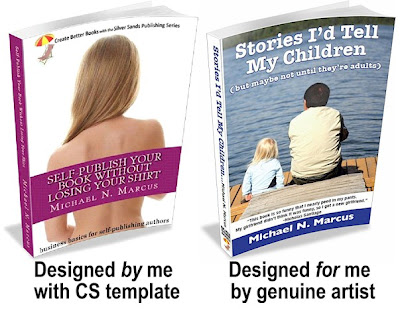 When I use LS, I pay hundreds of dollars to an artist to design my book covers. When I use CS, I play the part of the artist, and use a CS template as a basis for the cover. These covers won't win any awards, but are good enough. Sometimes I start a book with a template, and then switch to an artist-designed cover.
I usually begin my workday at around 3 a.m. (on the east coast). Early on Friday morning, the CS website had a notice to the effect that the "Cover Creator" software was unavailable because of routine maintenance, but would be back (as I recall) at 10:30 eastern time.
That time came and went, and a more troubling and less definitive message appeared. (Left click on image to enlarge.)

Computer glitches are not unusual, I've lived through many, and may have even caused a few.
But this glitch continued all day Friday, and now it's Saturday, and I still can't finish my cover.
Ironically, the CS trouble happened at the same time that self-publishing authority Aaron Shepard announced that he was going to shift some of his books from LS to CS. This was big news in the self-pub world, almost like Barack Obama joining the Tea Party. Or Luke Skywalker going over the the Dark Side.
When companies merge or get bought, there is usually an announcement about the expected efficiency and synergy -- how money will be saved by combining resources and firing excess people and eliminating duplication.
I don't know if CreateSpace's trouble was caused by Amazon's dark cloud, or by increased demand caused by Aaron's endorsement; but, as the Stones sang, "I was sick and tired, fed up with this."
I may have to find a new cloud.