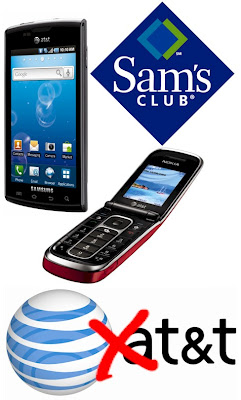 Last fall I finally succumbed to the jeerings of my 20-something nephew Joe and 20-something Cynical Cousin Dave (and a failing battery) and decided that it was time to make the move into the 21st century and get a "smart phone."

Early on Black Friday I was at Sam's Club in Orange, Connecticut to buy some other electro-toys, and wandered into their cellphone section and snooped around. I discovered that I could get a cool Samsung Captivate (the Samsung version of the Apple iPhone) for just 96 cents!

Without a wireless service contract, the phone sells for as much as $799.99. However, by renewing my AT&T contract for two years (as I usually do) the price was less than a buck. I could have gotten it for zero cents at RadioShack, or $499.99 (no contract) or $199.99 (two year contract) at AT&T.

I may have overpaid by 96 cents, or I may have saved $799.03. Either way, I'm not complaining. And I paid much less than AT&T would have charged me for a new iPhone.

My wife generally gets my cellular hand-me-downs. She had been using my four-year-old Motorola flip phone, so when I got the new Samsung, we assumed she'd move "up" to my two-year-old flip phone. In November, I ordered a new battery from Motorola. As of last week, they had sent THREE incorrect batteries, and could not tell me when they might have the right one.

Last Thursday we went to the AT&T Wireless store, and after nearly an hour, my wife narrowed her choices to three phones -- none of which were really the best choice. The best of these would have cost $40 (after receiving a rebate check in the mail about a month later). We'd also have to buy a new "SIM" card for about $30 and pay a dubious $18 "upgrade" charge. We walked out without buying.

On Saturday, we happened to in Sam's Club. We instantly found the perfect phone. It's a Nokia 6350 and does everything my wife needs a phone to do, and she declares it "sexy." She has not said that about me in a while.

No wait for a rebate. No upgrade charge. No SIM card charge. No sales tax. No miscellaneous charge. No high-pressure pitch to buy insurance or an extended warranty.

I thank super-salesman Armando Ayala for his expertise and patience.

The AT&T Strore did not have the Nokia model we bought at Sam's. It is available from the AT&T website for $89.99 before a $50 rebate, but they don't have the burgundy color my wife wanted, and it doesn't come with a new SIM card.