A weird coincidence;
and why is Breinigsville, Pennsylvania so important to publishing? 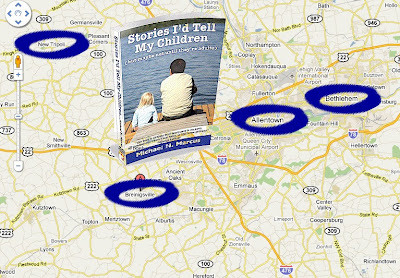 A lot of my mostly funny/mostly true book, Stories I'd Tell My Children (but maybe not until they're adults), takes place in the Lehigh Valley of east-central Pennsylvania. I attended Lehigh University in Bethlehem. The central story in the book took place there, and I also wrote a bit about nearby Allentown and New Tripoli (pronounced nutri-PO-lee).
Yesterday I looked at a MapQuest map of the area. I spotted a lot of towns and cities I had visited back in the 60s, and one place I had never visited or known about back them -- but which has become an important part of my life.
According to Wikipedia, Breinigsville was named for George Breinig, who established a farm in the area in 1789. In the 1860s, the Catasauqua and Fogelsville Railroad ran tracks into Breinigsville to serve iron mines. These mines shut down by the end of World War I, and the rails through Breinigsville were removed in the 1940s.
Not a hell of a lot happened since then. Breinigsville has no Indian casinos, presidential birthplaces, TV studios or natural wonders.
After 222 years, Breinigsville has fewer than 4,000 people.

But, it's conveniently located less than two hours from New York City and one hour from Philadelphia. Breinigsville apparently has lots of low-priced land that's used for manufacturing and warehousing that replaced farming and mining. Sam Adams beer, Kraft cheese, Grey Poupon mustard and A-1 Steak Sauce are made in the area.

So are my books -- including the book I wrote with stories about the area!

Strangely (to me, at least) Breinigsville, is home to a 130,000-square-foot printing plant operated by Lightning Source -- the dominant print-on-demand company and the company that prints and distributes most of my books.

And just a few minutes away from Lightning Source is a giant 600,000-square-foot warehouse operated by Amazon.com -- the company that sells most of my books.

Even weirder: Yesterday I received a purchase order from Amazon. They want to buy 10 copies of one of my books. The books are supposed to go to the Amazon warehouse in Breinigsville. 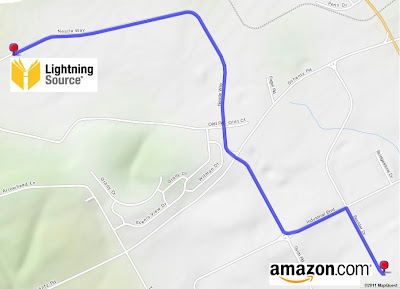 (left-click to enlarge image.)
Maps from MapQuest.
Posted by Michael N. Marcus at 4:51 AM