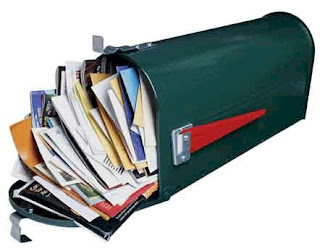 This is the time of year when each trip to the mailbox yields interest statements and income statements -- the raw materials used to create the annual work of fiction known as the Income Tax Return.

Years ago, when I lived in New York City, I had a simple formula that worked very well (i.e., no audits ever, and refunds every year):

For ten years I've been in Connecticut. There are no city taxes, but life is more complicated. I pay my accountant about $700 for a few hours work necessary to produce my annual business and personal federal and state returns. After much scientific number crunching, he still comes up with the same percentages I established 40 years ago.

I'll pass on a tip for a deduction I developed while working as an advertising copywriter and have continued to use as a webmaster and writer/publisher.

EVERY piece of media you consume should be deducted in the range of 25% to 100%. Deduct movies, CDs, games, concerts, artwork, vacations, MP3 players, big TVs, books, magazines, newspapers, iPad, smart phone, museum visits... all that stuff that helps you stay aware of trends in culture.

Years ago my father owned a chain of clothing stores. He once considered deducting his subscription to Playboy (which did provide news and advice about mens' fashions among the airbrushed large-breasted babes). Alas, he was afraid to list a skin mag on his tax return, so he sent too much money to the IRS.  I have no such reluctance -- and may have bigger cojones. 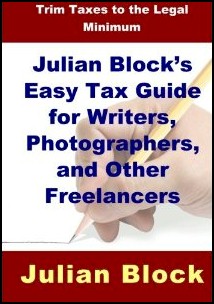 If you're a writer who'd like to learn about taxes from a genuine tax pro, read Julian Block's Easy Tax Guide for Writers, Photographers, and Other Freelancers. The price is $15.95 (tax-deductible, of course).

The book was published a few days ago (it's what used to be called "hot off the press') by my buddy Christy Pinheiro's PassKey Publications -- so I know it's a superb book, even before I read it.

Christy (a writer as well as a publisher) says, "It’s more important than ever for writers, photographers and other freelancers to familiarize themselves with steps that can keep their taxes to the legal minimum. This book offers detailed help, in simple language that everyone can understand, on how to keep more of what you earn. It is a guide to use throughout the year for advance planning that alerts you to new and frequently overlooked changes in the tax rules and explains how to take advantage of them and steer clear of pitfalls -- all completely legally. The author is a nationally recognized tax attorney and also a published author."

I'm thinking of putting all I know about taxes into a book, The Wiseass Writer's Guide to Apparently Absurd Tax Deductions that only Members of the Media Can Get Away With.

I was kidding when I started typing the previous paragraph. Now I'm not sure. Stay tuned, folks. 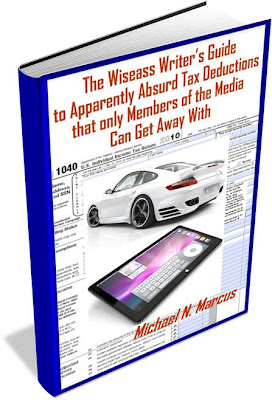 (Mailbox photo from WW.MilitaryTimes.com Thanks.)
Posted by Michael N. Marcus at 1:08 AM