Michael Hyatt is a hypocrite

Michael Hyatt is the chairman and CEO of Thomas Nelson Publishers, the largest Christian publishing company in the world and allegedly the seventh largest trade book publishing company in the U.S.
Last year, Hyatt caused a stink in the book business by forming a pay-to-publish alliance with Author Solutions. Writers whose books are not good enough to warrant a royalty-paying contract from Nelson, can pay thousands to be published by subsidiary Westbow Press. Its first book was overpriced and under-edited.
Hyatt publishes a blog to promote himself and his company. He says, "This is my personal blog. It is focused on 'intentional leadership.' My philosophy is that if you are going to lead well, you must be thoughtful and purposeful about it. I write on leadership, productivity, publishing, social media, and, on occasion, stuff that doesn’t fit neatly into one of these categories. I also occasionally write about the resources I am discovering. My goal is to create insightful, relevant content that you can put to work in your personal and professional life."
That sounds impressive.
Hyatt brags that he has been a church deacon for 23 years, but he tells us that  we should not believe or rely on anything he says: "I make no representations as to accuracy, completeness, currentness, suitability, or validity of any information on this blog and will not be liable for any errors, omissions, or delays in this information or any losses, injuries, or damages arising from its use."
The pompous weasel lacks the guts to stand behind his own words. What would Jesus think?
Hyatt recently published a blog post titled, "Why I Stopped Reading Your Blog." It lists six reasons, including "You don’t participate in the conversation. You either don’t allow comments or don’t participate in them."
But as I pointed out last February,  Hypocrite Hyatt doesn't allow comments on his blog from people who disagree with him. 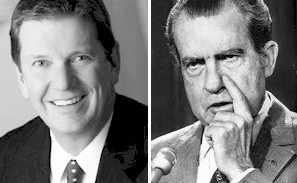 Hyatt, just like "Tricky Dicky" Nixon (above, right), maintains an enemies list. If someone has previously pissed off Hyatt, any comment from that person is blocked instantly, without any human review.
Apparently I never pissed off President Nixon. But after disagreeing with Hyatt-the-hypocrite once, I am forever banned from his blog.
Anything I try to post -- even the most complimentary comment, or something completely neutral or very helpful -- is immediately rejected by Hyatt's robotic sentry.
So much for "You either don’t allow comments..."
Posted by Michael N. Marcus at 2:43 AM

It's Too Easy To Get Pregnant
reports on some of the tragedies caused by people who should not be parents.

I never did it, was never arrested for it, never tried for it, and never convicted of it

tells the story of Michael's horrible and damaging harassment, and his response.


Oh, how stupid! provides an an occasional look at some of the stupidest things done by human beings.