Go back. Go back. Time travel is possible for writers. 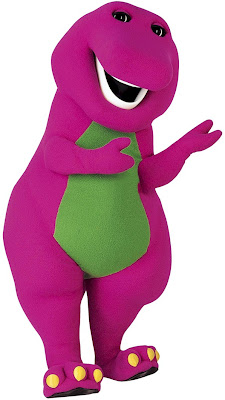 My career as a writer started in fourth or fifth grade, back when Barney roamed the earth.

My friend Alan and I wrote articles about the other kids in our school, and his father's secretary typed them up and printed our  "newspaper" on a mimeograph machine. We priced the paper at a nickel. I don't think we sold many, and may have published only two issues.

I have no copies of our short-lived paper, and don't even remember its name. The name was probably lame and my writing probably sucked and would embarrass me today.

Later, I was a journalism major at Lehigh University and wrote for the student newspaper, the Brown and White (named for the school's horridly dull colors which only a coprophile could be enthusiastic about). I probably saved most of my "clips" from those days, but all but one of them -- a major opus -- disappeared years ago.

After college I wrote for lots of magazines and some newspapers. At first I saved everything that was published. After a while, seeing my byline in print was no big deal, so I stopped clipping and saving. At one time I had bound volumes of Rolling Stone which included my columns. I think the huge books are in my attic, but I haven't seen them in decades. My decedents can decide what to do with them.

With current technology, time travel has to exist in the mind only.

But even without a time machine or a clipping file, there is a way for writers to go back to an earlier era and evaluate their youthful output. We can determine if indeed "the child is father to the man," or if adulthood strayed far from childhood and young adulthood.

I had a special thrill yesterday. I had an email conversation with Professor Wally Trimble, chairman of Lehigh's Journalism and Communication Department. He let me know that our student paper has been scanned back as far as 1894, and the issues are online and searchable!

Traditionally, newspapers have  had "morgues," where back issues become yellow and moldy, and sometimes crumble.

I know that the New York Times has digitized archives online, but I had no idea that the concept had reached college papers. I suppose that I shouldn't be surprised that Lehigh -- a school known for educating engineers -- would have a digital, online morgue.

Articles and ads going back over a century have been preserved -- perhaps for future centuries.

I was somewhat apprehensive about reading what I had written in the mid 1960s. Would I recognize my writing as "my" writing? How badly was my work butchered by editors? Was I any good then? Was I an asshole? 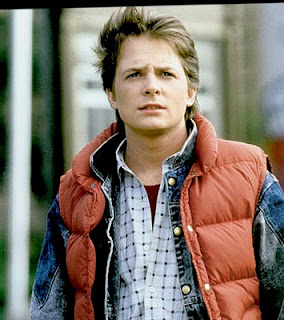 In one of the Back to the Future movies, Marty McFly wonders if his future kids will think he's an asshole. I understand his fear.

Researching and writing my recent memoir stirred up some long-buried emotions that probably should have stayed underground, and I was initially reluctant to type my name into the search window on the Lehigh website.

I could not resist for long. I typed in "Michael N. Marcus," and found my name listed as a "reporter" in a 1965-66 staff list. Strangely, I found no links for anything I had written.

I then typed my name without my middle initial, and my monitor revealed the good, the bad, and the ugly.

Apparently I had not yet started using my middle initial in my byline (probably because I despised my middle name until later in my life, when I also realized that there are many other Michael Marcuses and I needed to make my byline distinctive).

I did not find all of the pieces I remember writing, and found some I did not remember. Subjects ranged from mundane (a $50,000 allocation to improve campus safety that few read in 1966 and I did not read in 2011) to politics and reviews. I found a mildly critical review I wrote of a jazz concert, and a scathing review of a live electronic music concert performed by ME, that I might wish was not preserved for posterity. 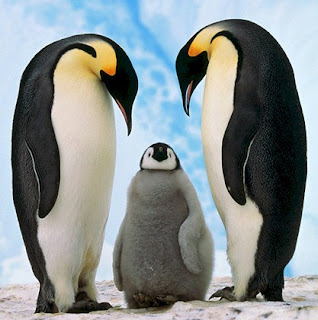 After months of wandering through Antarctic blizzards, female Emperor Penguins return home and are able to identify their mates from among thousands of apparently identical males.

I'm amazed that my writing "voice" in 1965 is not even remotely recognizable to me as me.

If I did not see my byline, I could not have identified my words -- and that was very weird. My word sequences were not even as distinct as the feathers on a damn penguin!

The young-me was a decent journalist, and his writing style is much more serious than the old-me. At least he doesn't seem like an asshole.

I'm sure there are people who think the old-me is an asshole. At age 64, I don't care.

(Barney pic may be from PBS. Photo of Michael J. Fox as Marty McFly is from Universal Pictures. Photo of penguins is from Southern California Public Radio.)
Posted by Michael N. Marcus at 6:01 AM