Author Solutions wants to conquer the universe, and has help from Writers Digest 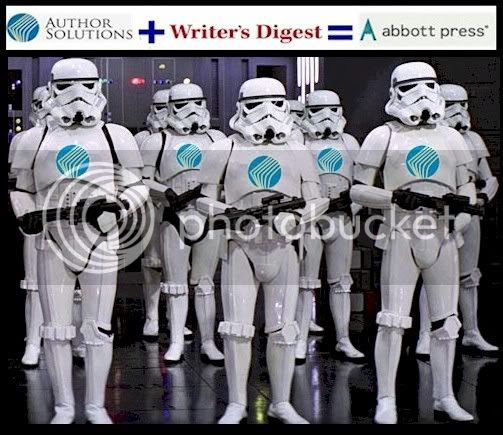 Is Author Solutions emulating Emperor Palpatine's Stormtroopers from Star Wars, or the "Resistance is Futile" Borg from Star Trek?
Author Solutions, Inc. (ASI) is a massive pay-to-publish empire which has grown by acquiring and combining such former competitors as AuthorHouse, iUniverse, Trafford, Wordclay and Xlibris. Last year ASI started a Spanish-language division called Palibrio. ASI also operates the self-publishing businesses for traditional publishers Harlequin, Thomas Nelson and Hay House. Those alliances pissed off many people when they were announced.

The latest announcement from ASI is even more disturbing. The press release they sent out on Saturday is below the following parenthetical paragraph.

(Saturday, Sunday and holidays are considered to be "slow news days." Many journalists work Monday through Friday and not on holidays. Press releases are often sent out on slow news days by companies who have to make announcements, but prefer that not much attention is paid to them. However, recognizing the paucity of competing news, some companies deliberately send out releases on the slow days so they will get noticed by those journalists who are working. Some companies simply send out releases with no consideration of the day.)

New York City (PRWEB) January 22, 2011 -- Writer's Digest, the oldest and most respected [NOT ANY MORE] media company dedicated to the advancement of writers, announced today it is partnering with the leading [BIGGEST, NOT BEST] self-publishing company, Author Solutions, Inc., (ASI), to launch Abbott Press-a self-publishing division. Named in honor of Richard K. Abbott, the legendary Writer's Digest editor, Abbott Press is devoted to helping writers improve their work and realize their dreams of getting published [AND TO WIPE OUT ABBOTT'S COMPETITORS] .

"In keeping with the mission of Writer's Digest, and in order to provide our consumers with the most complete information, inspiration, products and services to further their craft, we are proud to expand our portfolio to address a real desire of aspiring writers-to get published, be it by indie publishing [CUSTOMERS OF ABBOTT WILL NOT BE ENGAGED IN INDIE PUBLISHING]  or by traditional means," said Sara Domville, president, F+W Media. "Fully supported by the trusted experts at Writer's Digest, Abbott Press brings the same respectability, integrity, and commitment to editorial excellence as our Writer's Digest brand, [WHICH MAY LOSE ITS INTEGRITY] while maintaining a unique identity of its own, for the benefit of our authors."

"This is a landmark alliance, as Writer's Digest has been the relied-upon source for support and education for writers for more than 90 years. Its entry into the self-publishing arena further exemplifies the sea change toward indie publishing which puts the control squarely with the author," said Kevin Weiss, Author Solutions president and CEO.

Author Solutions, Inc. is getting too damned big.

More importantly, I don't like the idea of a magazine that carries advertising for competing self-publishing companies, to have a financial stake in the success of one of those companies.
I'm sure that WD wants the world to believe that the new arrangement will have no effect on its relationships with the competitors of its own Abbott Press. But, in an era when print publications are starving -- and since WD is operated by human beings -- it will be extremely difficult for WD to resist the opportunity to maximize its income by discriminating against Abbott's competitors.

WD may degenerate into a biased "house organ" for ASI.

In the past, I got pissed off at WD for having Outskirts Press sponsor the annual WD Writing Competition, giving credibility and visibility to Outskirts at the expense of other publishing companies. It also bothered me that WD runs events and publishes books that compete with the services and products of its advertisers.

The new deal seems much worse, and I'm very sorry to see it.

Stormtroopers photo from Star Trek
Posted by Michael N. Marcus at 4:36 AM