You never know where a book idea will come from. My newest book is Barbara Barth's fault. 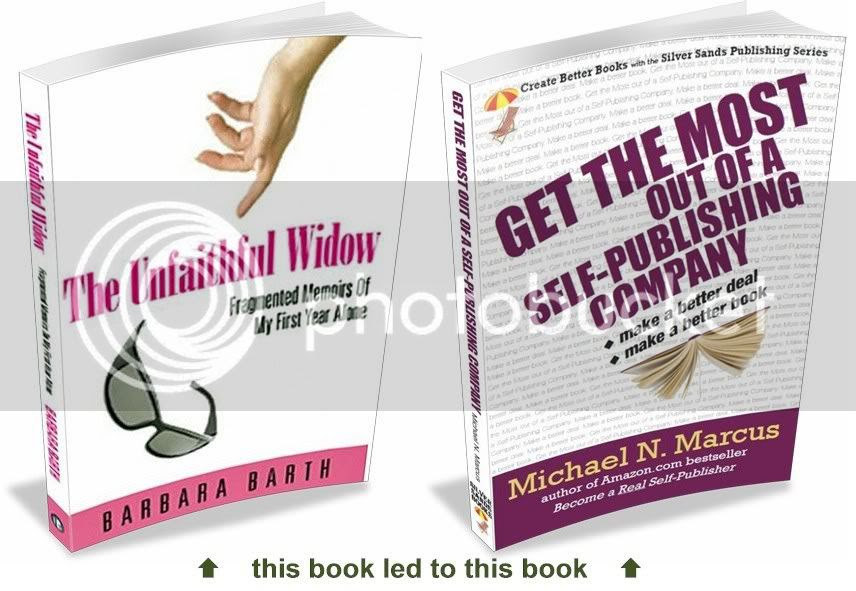 I frequently pointed out that no company could self-publish someone else, just as no one can self-medicate, self-educate or self-immolate someone else. And I often said that you can't be a self-published author or a self-publisher if you pay a company to publish your books.

I responded to Barbara's online claim of self-publishing with some highly critical words. In retrospect, I was probably unnecessarily mean and insulting.

Barbara could have been justified in ignoring me or telling me to "fuck off!"

I had previously written two books condemning self-publishing companies (which I then called "vanity publishers"), and recommended that authors form their own small publishing companies to have more control, make better books, and maybe make more money.

While bitching about Barbara's choice of publishers -- the often inept and dishonest Outskirts Press -- I had a realization. Actually, I had several.
The realizations led to a revelation: even writers who use lousy self-publishing companies could turn out first-class books, if they had some help. So, I decided to write a book to help them. I even used the formerly dreaded "self-publishing company" term on its cover.

Get the Most out of a Self-Publishing Company: Make a Better Deal. Make a Better Book comes out at a time when self-publishing — both on printed paper and in eBooks — is having tremendous growth. My new book aims to give authors the benefit of the experience I accumulated during over 40 years of professional writing. It’s filled with valuable time-saving and money-saving tips. I think it's a very good book, and so do its previewers. It's now on sale at Amazon, Barnes & Noble and elsewhere.

Sadly, many customers of self-publishing companies are disappointed in their books. You can minimize disappointment if you are properly prepared — and this book will prepare you. Don’t buy services and trinkets that you don’t need. Pay the right prices for what you do need. Let the publisher do what you don’t want to get involved in, and concentrate on the creative process (perhaps with independent editors and designers) to make a good-reading, good-looking book which you can be proud of and maybe make money from.

The comprehensive, illustrated book has 366 pages and covers all aspects of working with a self-publishing company. It includes selecting a book topic and title, choosing a publisher, writing, editing, proofreading, design, illustration, software, choosing suppliers, getting help, forming a business, copyrights, ISBNs, marketing, publicity, pricing, selling, returns, and much more. I cover recent developments which affect authors, such as the iPad, Microsoft Word 2010, Espresso Book Machine, Nook, Pubit!, AuthorHive, Google eBookstore, etc. There is an extensive section on eBooks and eBook readers, a large chapter on publishing terminology, reviews of recommended books. and even help with grammar and spelling.

My first book was published by Doubleday in 1976. In 2008, I formed Silver Sands Books with the intention of publishing just one book. I've published over a dozen in less than three years. Publishing is addictive. It’s hard to stop at one. This book will share what I’ve learned and — I hope — my enthusiasm. 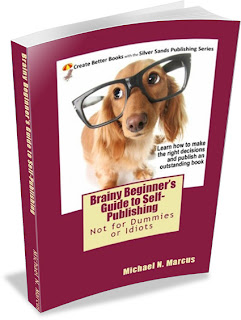 Barbara is also responsible for my putting a picture of a dog on my upcoming Brainy Beginners Guide to Self-Publishing.

There are other books about self-publishing for "dummies" and "idiots." Dummies and idiots can't publish books -- and probably can't write them.

I've done books about publishing with covers that show writers, readers and books. This time, thanks to Barbara Barth. I'm going with a golden retriever. Barbara has six dogs. I have one (a golden).
Posted by Michael N. Marcus at 1:14 AM