This may be my last chance to make fun of Brent Sampson in 2010. Or, maybe not. 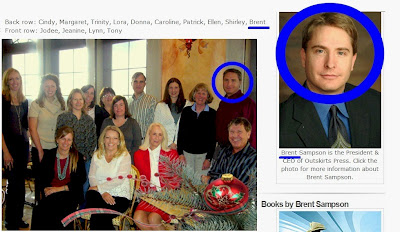 (left-click to enlarge photo)
Brent Sampson is the boss of Outskirts Press, a pay-to-publish company.
Both Brent and Outskirts do so many things so badly, that I often poke fun at them on this forum, and even wrote a book that is appropriately titled Stupid, Sloppy, Sleazy: the strange story of vanity publisher Outskirts Press. How do they stay in business?
Brent recently published a photo of the annual Outskirts holiday party on his blog. The photo was apparently taken on 12/14/10. To the right of the party photo, the blog displays Brent's official publicity photo. There's no date for this photo, but it appears to have been taken about 40 pounds ago.
Brent: it's time to get an up-to-date pic that looks like the 2011 version of you. And, this time, pick a different shirt and tie (that go together). Also, dark blue dress shirts died with disco. Make sure your collar point is not flapping in the breeze, and don't pose in front of a shit-brown background. 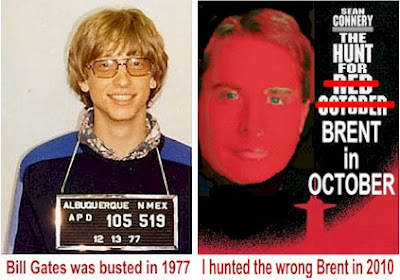 A publicity photo is as important as a mug shot. It can help people who are looking for you to find you, and should provide a fairly accurate rendition of your current physical essence.
I have no reason to assume that the cops or the feds have been looking for Brent, but I was.
Back in October, Brent and I were both attending the Self-Publishing Book Expo in Manhattan. He was speaking and I was reporting. I like Brent much more as a speaker than as a writer, but I missed his session.  I wanted to meet him and tell him that I have come to agree with him that there is a difference between a "self-publisher" and a "self-publishing company."
Unfortunately, I searched the show floor for a person who looked like the man in Brent's official photo -- and there was no such person.
Had I realized that the three-dimensional, chubby-cheeked Brent bears little or no resemblance to the two-dimensional Brent, I might have found him. I might have gotten to shake his hand. I might have gotten to like him a little bit more. I might have gotten to understand him and his company a little bit better. I might have come away from our brief interlude with the feeling that maybe I shouldn't dump on him quite so much.
But, alas, my hunt for Brent in October was fruitless . . . so, the dumping goes on.
(Unlike Brent, your humble editor has been losing weight. There is less of me now than when my portrait was taken last spring, and I will get a pic of the 2011 version of me.)
Posted by Michael N. Marcus at 7:34 AM