Mea culpa: Responding to my critics

I'm pleased and proud that reviews of my eight books on Amazon.com are overwhelmingly positive. The books have received mostly five-star reviews, just a couple of four-star reviews, and nothing worse than four.

However, since I spend a lot of space on this blog criticizing books by other authors, it's seems fair to post the criticisms of my books -- and, of course, my responses.

(1) "The fonts are HUGE, my goodness, I haven't seen fonts this big since elementary school!"

The body type is 12-pt. That's the same size that the U. S. Supreme Court requires in briefs filed for the Court (although I use Constantia and they want Century Schoolbook, which has slightly taller lowercase letters). Both the Supremes and I want words to be easy to read. I've recently bought several books that use fly-poop-size type that is impossible for me to read.
CRITICISM: INVALID

(2) "The embedded images all over the book have very little -- far too little -- whitespace around them."

You're right. This was an early book, and I was experimenting and learning. My later books have more space around the images.
CRITICISM: VALID

(3) "I noticed numerous repetitious passages in the book where the same argument is made multiple times."

(4) "some of the comments printed in this book are not fact - at least not in my experience."

A comment may be an opinion, not a fact; and people have different experiences.
CRITICISM: INVALID

(5) "For example, the time to get published taking so long. Frankly, what's stated is not true with my experience. If you submit a decent error-free manuscript (like you would to Lightening Source), one read through the galley and if all is okay, you sign off and the next day you're for sale."


So, it looks like I've received one-and-a-half valid criticisms for eight books published over two-and-a-half years. I can live with that. The book that received the valid criticism has been on two Amazon bestseller lists and one reviewer called it "the best in its field." The new updated and revised version of that book is bigger and better -- and the price is the same. 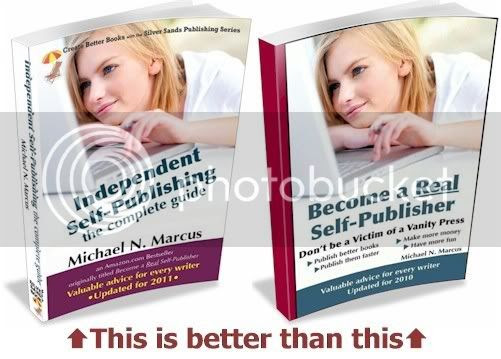